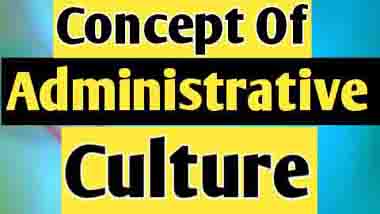 It influences the relationship between bureaucrats and other members of society.

There are two main approaches to study administrative culture.

It should be noted that these approaches are based on some common values such as fundamental rights, freedom, efficiency, accountability, fairness, etc.

Deontological refers to the study of duty and ethical/moral obligations of individuals as well as of the organization represented by them. The deontological approach in the study of Administrative culture helps scholars to focus on the ethics and morality of the administrator.

This approach basically analyses the success of a decision (taken by the administrator) in producing the desired effect. The teleological approach also concerns the casual relationship between the means and the desired ends.

As an approach to the study of administrative culture, the teleological approach holds that processes and procedures in an administration ought to be determined by ultimate purpose or ends.

The seed of the term “administrative culture” was sown in 1963 when Gabriel Almond and Sydney Verba published their path-breaking work, “Civic culture“

The administration is culture-bound as well as a complex phenomenon:

The administration is shaped by the setting or environment in which it operates. It creates specific features in various environments.

Nevertheless, it is realized that the administrator and his outlook or world view, his perception,political-administrative environment, socio-cultural norms, ideas of society and the response of the society helps in understanding as well as determining the administrative culture of any society.

Administrative culture may be defined as the accumulated depositary of the symbols, values, attitude, norms, etc, that governs and shape the administrative system.

Secondly, the interaction of administrators with the public and political masters also determines some other components of administrative culture.

Fred W. Riggs developed some models to analyze the administrative system of developing counties. First of all, Riggs published a model in 1956, where he classifies society into two types “Agraria” and “Industria”.

Whereas Agraria refers to an agricultural society, industria refers to an industrial society. However, this model was criticized for having many limitations. Therefore, Riggs developed another model, which was known as ” the fused – prismatic – diffracted model”.

According to Riggs, in a fused society a single structure carries out various functions. But on the other hand, in a diffracted society separate structures are created to carry out specific functions.

According to Riggs between these two societies, there exists a number of societies, in which we can find the features of both fused and diffracted societies. These societies are called “Prismatic societies”.
A prismatic society is characterized by various economic and administrative sub-systems. Riggs called these administrative sub-systems as “SALA MODEL”, which have certain characteristics of diffracted “bureau” and fused “chamber”.

In a prismatic society the appointment of various administrative positions, as well as the performance of administrative functions, are highly influenced by family welfare, nepotism, favoritism, etc.
As a result, in prismatic society bureaucrats give priority to personal betterment than social welfare and their attitudes are governed by parochialism.

Normative Concept Of Democracy – Position and Future of the State

Relation Between Executive And Legislature – Essay