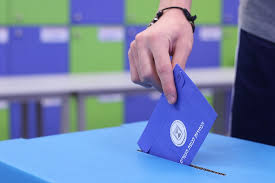 The first-past-the-post electoral system is a voting system for single-member districts, variously called first-past-the-post (FPTP or FPP), winner-take-all, plurality voting, or relative majority. In political science, it is known as Single-Member District Plurality or SMDP. This system is in use at all levels of politics; it is very common in former British colonies.

If voting follows sincere preferences, Memphis is selected with the most votes. Note that this system does not require that the winner have a majority, but only a plurality. That is, Memphis wins because it has the most votes, even though more than half of the voters preferred another option.

First-past-the-post encourages the tactical voting technique known as “compromising”: voters are encouraged to vote for one of the two options most likely to win, even if it is not their most preferred option. In the above example, voters from Chattanooga and Knoxville may “compromise” by voting for Nashville, which they prefer to Memphis.

If enough voters vote using this tactic, the first-past-the-post system becomes a form of runoff voting where the first round is held in the court of public opinion. This can give substantial power to the media as voters will tend to believe their viewpoint on who the leading contenders are likely to be in the election and use that viewpoint to decide where a “tactical” vote would be (in the voter’s opinion) best used. This can also become a system promoting votes against more so than votes for.

An interesting anomaly in the results of this system arose in the Canadian federal election of 1926 for the province of Manitoba. The province was entitled to 17 seats in that election. The result was very different from how people voted.

The Conservatives clearly had the largest number of votes across the province, but received no seats at all. The other parties were able to have success by having concentrated support in particular constituencies, and by not running candidates in others.

This presents a problem because the parties tend to narrowly focus on the needs and well-being of specific electoral districts where they can be sure to win seats, rather than be sensitive to the sentiments of voters everywhere. In order to secure election results, some also choose to use redistricting to distort election results by enclosing party voters together in one electoral district.

Because of these anomalies and the tactical-voting tendencies, Duverger’s law predicts that constituencies that use first-past-the-post systems will become two-party systems.

Sometimes, the voters are in favour of a political party but do not like specific candidates. An example was the premier of Alberta, Donald Getty. His government was re-elected in 1989, but because of voter dissatisfaction with the way the government was led, Getty, the leader of the Alberta Progressive Conservative Party, was not re-elected by voters from his electoral district.

Similarly, in the 1999 Ontario provincial election, Mike Harris and his Progressive-Conservative party was re-elected to a majority government, but symbolic of the growing discontent among voters about cuts to education, his education minister, and strong ally was resoundingly defeated by the opposition candidate.

It is often claimed that because each electoral district votes for its own representative, the elected candidate is held accountable to his own voters, thereby helping to prevent incompetent, fraudulent or corrupt behaviour by elected candidates.

The voters in the electoral district can easily replace him since they have full power over who they want to represent them. In the absence of effective recall legislation, however, the electors must wait until the end of the representative’s term

Countries that use this system to elect the lower or only house of their legislature include:

The first past the post election system is used in the Republic of China or Taiwan for executive offices such as county magistrates, mayors, and the president, but not for legislative seats which used the single non-transferable vote system.

This has produced an interesting party structure in which there are two broad coalitions of parties that cooperate in executive elections but which compete internally in legislative elections.

29 States of India and Their Capitals and Languages

Relation Between Executive And Legislature – Essay