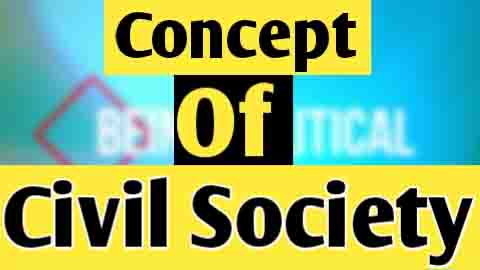 The origin of the modern idea of civil society can be traced back to 18 century when political theorists like Thomas pain and Hegel regarded the concept of civil society as a space that is parallel to but separate from the state.

According to Jan A Schulte, “Civil society can be understood as a political space, where voluntary organizations deliberately seek to shape the rules that govern the aspect of social life.”

There are two dimensions of the definition of civil society-

As per the analytical definition, Civil Society is a domain, where individuals and groups articulate their interests. It is the realm where people met up to propel the interest they hold in common.
Civil society is a sphere that stands between family and state. It is comprised of associational life that reflects the degree to which residents share their own complaints and requests with others. It is an arena, where private become public and social become political.
The normative definition of civil society lays emphasis on the importance of norms. As per the normative definition, civil society teaches people political values and foster social norms, which is necessary for people to live together. It teaches people how to enjoy as well as show respect for their liberties.

The economic role of civil society basically focuses on securing livelihood and providing service where State and markets are weak. It also focuses on nurturing social capital, which means citizens’ ability to work together willingly for the fulfillment of their common long term interest.

In the Social role civil society can be a reservoir of co-operating values, social norms, cultural life, and intellectual innovation. It imparts the knowledge of citizenship and it can also provide a platform where people can express their views that they hold in their heart.

The role played by Civil Society in ensuring good governance has become the center of discussion nowadays.
Civil society is regarded as a significant agent of good governance. It ensures good governance, firstly by analyzing various policies and decisions made by the government and secondly by controlling and checking the state’s exhibition and conduct of public authorities.
The civil society gives people the medium and channel through which they can make their voice heard in the government’s decision making, which helps in promoting transparency and accountability and also to curb corruption.

Over the last two decades, civil society has evolved significantly. It is perceived as the assorted and ever more extensive ecosystem of individuals, and institutions. Broadly speaking, civil society is commonly defined as a sphere outside family, market, and state, which encompasses a wide range of purposes, structure membership, and geographical coverage.
Civil society can be viewed as a social space, which isn’t a piece of family, market, and state, where peoples meet up to arrange their relation or connection with the State.

Full Explanation of The Evolution of Social Science