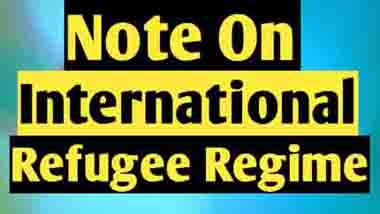 International Refugee Regime is a body of laws, rules and regulations that outline the rights responsibilities and obligations that a state has towards Asylum seekers or refugees.

1) 1951 convention on the status of refugees.
2) office of the United Nation’s High Commissioner for refugees.

It was drafted as a result of recommendations by the United Nation’s commissions on human rights. It was a landmark in setting the minimum standard for the treatment of refugees.
It defines a refugee as someone who leaves his/her country of origin due to a real fear of persecution based on their race religion, nationality, etc.
The convention also defined the right to which refugees are entitled to. Article 33 of the 1951 convention states that “no state shall expel or return a Refugee to the territory in which his/her life or freedom would be threatened on account of his/her race, religion, nationality or membership of a particular social group, etc.

Office of the United Nation’s High Commissioner for refugees:

On 11 January 1949 United Nation’s general assembly set up the office of the High Commissioner of the refugee as a subsidiary organ of the general assembly.
The main task of The United Nation’s High commissioner for refugees is to provide internal protection to Refugees and to seek a durable solution for the refugee problem. The high commissioner’s functions are qualified as entirely non-political, humanitarian, and social.
Article 35 of 1951 convention gives United Nations High Commissioner for Refugee an explicit mandate to monitor the implementations of the 1951 convention by States.

Other functions of the United Nations High Commissioner for refugees:

1) Promoting measures to improve the situations of Refugee
2) Promoting the admissions of Refugee to the territorial of state
3) Establishing contact with Government, Inter-Government and private organizations dealing with refuse questions.
International Refugee Regime is the most established and long-standing regime governing human mobility. Initially, it was fairly isolated but now some emerging regimes such as human rights regimes have been reinforcing the norms of the international Refugee Regime.
For example, the European convention on human rights enforced the principles of “non-refoulment” i.e. a state cannot forcibly return an individual or refugee to a state in which he/she may face persecutions. This principle was set out in the 1951 Refugee convention.

In today’s transnational world, where boundaries are losing its definition, the refugee issue has become one of the most complicated issues before the world community. As the International Refugee Regime enters into the 21st century, the issue of gender has become significant in refugee theory.
Children and women form a majority of the Refugee population. Therefore some significant step has been taken in recent years to incorporate gender issue into the international refugee regime.

United Nation’s High Commissioner for Refugee has taken concrete steps towards recognizing women within the traditional refugee definition. However, though gender issues are increasingly recognized with International Refugee Regime, there is still no legally binding instrument that focuses on the needs of the female refugees.
Therefore United Nations High Commissioner for Refugee will have to reinforce many of its policies and have to accept the changing realities of the international system if the regime is to progress any further.