Skip to content
Travelling
The City of Los Angeles is the entertainment capital of the world, a cultural center boasting more than 100 museums, and a paradise of idyllic weather. This sprawling Southern California city is the center of the nation’s film and television industry and is located in a large basin bounded by the Pacific Ocean on one side and by mountains as high as 3,000 meters on the other.

With a population of about 4 million people, each neighborhood offers something different to explore and discover. The weather in Los Angeles is mostly sun, sun, sun, with year-round heat, but there are microclimates, meaning the daytime temperatures can vary as much as 20 °C between inland areas.

Hollywood was established in 1853 and was actually a thriving agricultural community. These days the farming tools have been replaced by sidewalk stars and neon lights, with the area producing movies and television shows since the early 1900s.

Los Angeles has an exhaustive array of things to do and if you’re a film buff, vintage Hollywood is a must-see. Some classic attractions in the area include the Hollywood Sign, the Getty Centre, UniversalStudios Hollywood and the Hollywood Walk of Fame.

10) At number 10 take a trip to Universal Studios 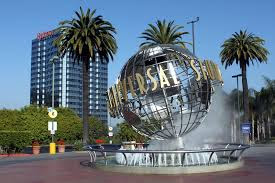 The rides are guaranteed to thrill and make you feel like you are in the movie. Visitors can get a behind the scenes look at moviemaking secrets and experience the award-winning King Kong 360 3D on the world-famous Studio Tour.

Then explore the mysteries of Hogwarts castle and visit the shops of Hogsmeade at The wizarding world of Harry Potter. Guests can fight to survive in a world overrun by hungry walkers in the Walking Dead attraction.

This amazing amusement park is open daily and facilities found inside include restrooms, food and beverage concessions, gift shops and the WaterWorld stage. The whole family will love this attraction and it is an absolute must for any visitors to Los Angeles.

9) At number 9 is Los Angeles Zoo and Botanical Gardens

Los Angeles Zoo and Botanical Gardens is a lush oasis tucked into the hills of GriffithPark, featuring species from around the world. Visit the Los Angeles Zoo to see your favorite animals, learn about wildlife conservation, and enjoy an entertaining day with friends and family at this wondrous attraction.

Visitors can participate in keeper’s talks and presentations, the world of birds show, or see what elephant care looks like. The Los Angeles Zoo and Botanical Gardens opened on November 28, 1966, and is home to more than 1,100 mammals, birds, amphibians and reptiles representing more than 250 different species of which 29 are endangered.

In addition, the Zoo’s botanical collection comprises several planted gardens and over800 different plant species from cactus and succulents, to roses and dense bamboo forests. The Los Angeles Zoo continues to be a popular attraction in L.A. but the zoos size of 133acres, plus a huge parking lot, means that it rarely feels busy.

As the largest municipal park in Los Angeles, Griffith Park protects acres of mountains and canyons at the eastern end of the Santa Monica Mountains. It’s a remarkable stretch of rough, hilly wilderness in the heart of an enormous urban area and it’s also home to a wealth of culture.

Griffith Park spans over 4,210 acres of landscaped parkland, wild oak trees and untouched terrain. For those who want to do more than explore the many acres of land, or walk the 53 miles of hiking trails, a trip to the observatory is a must.

Here you can look through one of the world’s most famous telescopes and observe the stars above. Other activities in the park include horse riding, a visit to the L.A. Zoo, a round of golf, catch a show at the Greek Theatre, or take a walk for an excellent view of the Hollywood sign.

Meet Tinseltown’s biggest A-list stars, movie directors, music legends, and more at MadameTussauds Hollywood. Located on Hollywood Boulevard, Madame Tussauds Hollywood is the place where you can take center stage with all your favorite stars.

Get up close and experience stardom like never before with over 125 incredibly life-like figures from the celebrity worlds of film and television without velvet ropes or barriers. Take a trip down memory lane with some of Hollywood’s original stars.

Saddle up and shoot the breeze with Clint Eastwood and John Wayne, check out Bette Davi’s eyes, and strike a pose with Marilyn Monroe. Immerse yourself in history and culture, and meet the famous and infamous iconic stars.

6) At number 6 get arty at The Getty Centre

The Getty Centre is one of the most impressive architectural achievements in the United States and it also contains some of the finest works of art in the world. The circular concrete and steel structure was designed by renowned architect Richard Meier, and it houses an abundance of art from various ages and nations.

This spectacular museum boasts a most impressive collection containing works by notable artists such as Van Gogh, Monet, and Cezanne, along with the architectural triumph of its six buildings and gardens. There is also a permanent collection of paintings to view at the Centre including many pre-20thcentury pieces. If you like sculptures there are four pavilions divided up by their era.

The museum also offers spectacular views of Los Angeles on clear days. But best of all, entry to the museum is free and no reservations are required. Available facilities include coffee carts, two cafes, a restaurant, gift shops and a garden with more than 500 different kinds of plants.

The Hollywood Sign is one of LAs most iconic signs and is one of the most recognized landmarks in the world. It may also be the only major landmark whose status was completely unintended. It was originally built in 1924 to promote the Hollywoodland real estate development in the foothills of Mt. Lee, a neighborhood now known as Beachwood Canyon.

The idea behind the sign was that Hollywood was a place where magic was possible and dreams could come true. The 50-foot tall billboard, placed on the south-facing side of Mt. Lee 1000 feet above the city, was originally lit with 4,000 light bulbs and was only designed to last until all the property was sold.

Now a cultural icon overlooking Hollywood the Hollywood Sign is more than just nine white letters spelling out a city’s name, it’s one of the world’s most evocative symbols and a universal metaphor for ambition, success, and glamour.

The Los Angeles County Museum of Art is an art museum located on Wilshire Boulevard in the Miracle Mile vicinity of Los Angeles. Since its inception in 1965, the Museum has been devoted to collecting works of art that span both history and geography, in addition to representing Los Angeles’s uniquely diverse population.

The Los Angeles County Museum of Art lays claim to being the largest art museum in the western United States with objects displayed in six buildings over a 20-acre campus. With almost 130,000 pieces spanning from antiquity through to modern times, the museum’s strengths are its holdings of Asian art and Latin American art, ranging from pre-Columbian masterpieces to works by leading modern and contemporary artists.

There is also a brilliant collection of outdoor sculptures and artwork to enjoy that rank among the most popular photo opportunities in the city. Michael Heizer’s Levitated Mass allows you to walk under a 340-ton boulder, while Penetrabileby Jesus Rafael Soto is an irresistible magnet of swaying plastic noodles in front of the Ahmanson Building.

This huge complex consists of a number of separate buildings that have been acquired and renovated over the years and definitely deserve a visit.

Right in the heart of the Los Angeles are the La Brea Tar Pits that are considered one of the most famous fossil localities in the world. Although the pits look like the set of a movie, hot tar has been bubbling from the earth at this spot along Museum Row in the Miracle Mile for about 40,000 years.

The tar is often covered with dust, leaves, or water and over many centuries, the tar preserved the bones of trapped animals. The tar pits have yielded one of the biggest collections of Ice Age fossils in the world, and more than 600 species have been found, from snakes and mollusks to sloths and mountain lions.

The first excavations at the tar pits began in the early 20th century, and if you visit today, you’re still likely to see scientists preserving bones or digging in the asphalt. Sticky asphalt is difficult to clean off the bones, but it also keeps them in pristine condition. This means scientists can look at features as subtle as the markings on teeth.

Visitors can experience the world’s only active, urban Ice Age excavation site and see science in action, right in the heart of Los Angeles.

2) At number 2 is the Aquarium of the Pacific

Visitors can marvel at majestic marine life and get up close to fearsome sharks, adorable penguins, alien-like jellyfish, poison-arrow frogs and more. There are rock pools and touch-tanks, where you can handle some of the creatures, while the Tropical Pacific Gallery, will dazzle you with stunning seahorses, sea dragons, vibrant coral and clownfish as well as sea turtles.

Then learn about the science of marine biology and oceanic conservation at interactive exhibitions and talks. Throughout the year, the Aquarium features art exhibits, performing arts shows, and cultural festivals as a way to engage new audiences and make science accessible. In addition to public programs and exhibits, the Aquarium is involved in numerous conservation efforts, including sustainable seafood, watershed education, ocean literacy and more.

The Hollywood Walk of Fame is such an attraction that every year, approximately 24 ceremonies are broadcast to keen viewers around the world. In these ceremonies, the latest addition to the walk has their star placed into the pavement.It is completely free to come and see the walk and if you are lucky you will even get to see a new star being installed.

With so many five-pointed brass stars glittering up from the sidewalks, this infamous strip is a must-see in Los Angeles, find the star you’re looking for and snap a photo with it!

So that sums up our top 10 things to do in Los Angeles, we hope you enjoyed it.