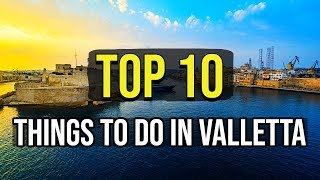 Valletta is the capital of the Mediterranean island nation of Malta and with an intense history behind it, the whole city is listed as a UNESCO Heritage Site.

The walled city was established on a peninsula in the 1500s by the Knights of St. John, a Roman Catholic order.

Known for its museums, palaces and grand churches, the streets here wind around towns and villages taking you past some of the oldest buildings in the world on this pretty isle.

At the tip of the peninsula on which Valletta was built lies Fort St. Elmo, strategically placed to defend the harbors on either side of the city.

Built-in a star formation, this was the focal point of the Siege of Malta that happened in 1565 and was a period in history when some 1,500 knights lost their lives.

Guided tours will take you all around the fort and fill you in on the fascinating history of the fortification.

With 35 stops at major attractions throughout Malta and two routes to choose from, the Hop-on Hop-off Bus is a great way to explore the city and island.

The fleet of buses will whisk you between stops, specially chosen to give a comprehensive introduction to Malta’s rich history and dazzling culture.

With audio guides and unbeatable panoramic views, visitors can get to know this magical island in detail.

8) At number 8 is the Upper Barrakka Gardens

The Upper Barrakka Gardens are public gardens in Valletta and along with the Lower BarrakkaGardens, they offer a panoramic view of the Grand Harbour.

The gardens are located on the upper tier of St. Peter and Paul Bastion, which was built in the late 16th century.

They provide a shady retreat from the bustle of the city, and the balcony has one of the best views in Malta.

7) Number 7 is the Grand Masters Palace

The Grandmaster’s Palace was once the seat of power for the Order of the Knights of St.John and served as the Governor’s Palace during British rule, nowadays it houses theOffice of the President.

The stern exterior of the 16th-century Grand Masters Palace conceals a sumptuous interior, which has been expanded and embellished throughout the centuries.

The Palace Armoury houses one of the world’s largest collections of arms and armor that is still housed in its original location.

The collection is a fascinating glimpse into the physical artifacts that remain from past centuries and the battles fought.

6) At number 6 is the National Museum of Archaeology

The National Museum of Archaeology is housed in the impressive 16th-century Auberge de Provence.

Exhibits include delicate stone tools dating from 5200 BC, Phoenician amulets and an amazing temple model.

Malta’s history dates back to around 5900 BC and numerous artifacts have been found across sites that date back to the early periods, telling a story of Malta’s earliest inhabitants.

An audio-visual experience, Malta 5D presents the story of Malta’s history in a technologically advanced way with 3D visuals and physical special effects.

This theatre takes you on a unique journey of Malta’s rich history and culture. The auditorium treats visitors to moving seats, air blasts, water spray, and even leg ticklers while watching the film, and it is also available in 17 different languages.

The 20-minute footage takes you on a fast-paced journey, bringing some of Malta’s finest history to life.

4) At number 4 is The Manoel Theatre

This theatre has been in operation since 1732 and constructed under the Grand Master of the Knights of St. John.

The interior is the main attraction here and you will find gilt decorations throughout, including in the main auditorium, which is covered in blue and gold.

There are only 623 seats which give the theatre an intimate feel and visitors should also look out for the beautiful white marble staircase and a courtyard bar.

St Johns Co-Cathedral, located in St. John’s Street, is Malta’s most impressive church. The outside is plain, having been designed by the military architects who built Valletta as the Knights citadel capital in the 1570s.

The interior, however, is dazzling, every inch covered in gold, marble or paint. Even the floor is a sea of tombs in colored marble.

The oratory is home to two works by Caravaggio including his largest signed painting, the superb Beheading of St John.

2) At number 2 is Valletta Waterfront

The stunning promenade of Valletta Waterfront was originally built by Grandmaster Pintofor the Knights of St John to use the buildings as stores.

A tranquil location away from Valletta’s main center, this landmark still boasts the original stores, 19 of which have been converted into restaurants.

Visitors can also go for a breezy walk along the promenade and take in the views across the water.

See the sights of Malta from a breezy boat and then go for an afternoon swim around the beautiful Blue Lagoon.
This Gozo and Comino Blue Lagoon Cruise is the easiest way to see the best of Maltasislands and tranquil blue waters.
With rugged shores and secluded sandy beaches, visitors can soak up the sights of Maltascoastline from the water!

So that sums up our top 10 things to do in Valletta, we hope you enjoyed it.