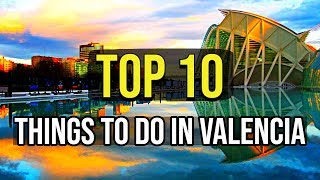 The port city of Valencia lies on Spain’s south-eastern coast, where the Turia River meets the Mediterranean Sea. It is one of the most vibrant, forward-thinking and cosmopolitan cities in Spain and has a heritage, culture, and nightlife to rival the best cities in Europe.

The city has a vibrant old center, with an abundance of little streets with splendid medieval buildings and stunning architecture. There are also ultra-modern visitor attractions in the City of the Arts and Sciences, and it all goes to make Valencia one of Spain’s most interesting destinations.

10) At number 10 is the Oceanogràfic of Valencia

This cutting-edge oceanarium opened in 2003 and is located in the east of the city of valencia. The aquarium is organized by zones, each with a distinct environment, and uses seawater pumped from Valencia’s waterfront.

As one of the biggest aquariums in Europe, there are more than 45,000 individual animals from 500 different species. Visitors can get to know tiger sharks, penguins, walruses, dolphins, sea lions and many more at this impressive attraction.

Within minutes of the old-town, the family-friendly Malvarrosa beach is a wide strip of golden sand that stretches for a kilometer along the city’s seafront.

The beach has been awarded the Blue Flag for all the amenities it provides, with lifeguard towers, a medical station, drinking fountains, showers, and its easily accessible ramps and footpaths.

The Palau de Les Arts Reina Sofia is an opera house and cultural center that opened in October2005. It is a spectacular building and one of Spain’s modern architectural wonders.

With a true behind-the-scenes tour, visitors can stand where some of the greats of opera, dance, and theatre have stood and learn the science behind the chambers aesthetics and acoustics, with a knowledgeable, English-speaking guide.

7) Number 7 is The Central Market of Valencia

Mercado Central is a public market located across from the Silk Exchange in central Valencia. Built-in the 1920s, the art nouveau market is one of the largest in Europe and has beautiful stained glass and mosaics adorning the domes of the iron structure.

With over 1,000 stalls piled high with the best seasonal produce, this is an amazing place to visit, for the sheer variety of food and the impressive setting.

The City of Arts and Sciences is an entertainment-based cultural and science complex in the city of Valencia. It was started in the mid-90s and the finishing touches were made in 2005.

Within the large buildings are cultural venues and first-class family attractions like the planetarium, an IMAX Cinema, or the breathtaking L’Umbracle, a botanical collection of plant species native to Valencia.

Visitors can see the skeletal remains of dinosaurs unearthed from dig sites nearby, stroll through a replica International Space Station, bounce sound waves off a giant arc and so much more!

The Turia river flowed around the city until the 1950s when it was diverted after flooding. The riverbed has now been transformed into nine kilometers of beautiful green space creating a scene of pine forest, orange groves, palms, and paths that lead past sports facilities, play areas and fountains.

A total of 18 bridges still cross the riverbed, the oldest dating back to the middle ages, and they are now just another part of the unusual scenery in the park.

4) At number 4 is Valencia Cathedral

The city’s vast gothic cathedral dates to the 13th and 14th centuries, with renaissance, baroque and neo-classical modifications that were made over the next few hundred years.

The museum contains a chalice recognized by the Vatican as possibly the original HolyGrail and visitors can also see paintings by Goya and other major artists. A climb up the Micalet belltower gives spectacular sweeping views from the top.

This splendid building, a Unesco World Heritage site, was originally Valencia’s silk and commodity exchange that was built in the late 15th century when the city was booming. It is one of Spain’s finest examples of a civil Gothic building.

2) At number 2 is the Serranos Gate

The Serranos Gate, also known as Serranos Towers is one of the twelve gates that formed part of the ancient city wall of Valencia. It was built in the Valencian Gothic style at the end of the 14th century and offers visitors fantastic views of the city and river.

The back of the towers has been opened so that the pointed arches and the vaulted domes can now be seen from the Plaza.

1) And at number 1 is Valencia Bioparc

One of Spain’s biggest zoos, Bioparc Valencia offers a brilliant animal park experience where the animals live in as natural a habitat as possible, where traditional railings are replaced with rivers or unobtrusive glass screens.

Visitors can explore the ecosystems of the savannah, the forests of Madagascar and equatorial Africa while getting up close to silverback gorillas, leopards, lions, rhinos, hippos and many more.

So that sums up our top 10 things to do in Valencia, we hope you enjoyed it.