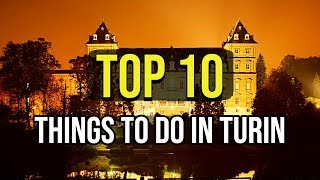 Located in the northwesterly part of Italy, Turin is the capital of the Piedmont region and sits on the river Po.

It is known for its refined architecture, stately baroque buildings, grand squares, and delicious cuisine. Once the Roman Empire had collapsed in Western Europe, Turin was occupied by various different nations and actually served as the first capital of Italy.

The city has been a major cultural and economic center for the country for many years. Today the city is a fantastic blend of old and new and provides a brilliant array of attractions.

Possibly the most distinctive building in the whole of Turin, the Mole Antonelliana towers above the surrounding skyline and its huge pointed spire is an icon of the city.

It was completed in 1889, and today it is the home of the National Museum of Cinema, housing equipment, and memorabilia from the earliest days of film production to the present.

But the real draw is the viewing platform at the top of the building, which offers amazing views of the city and mountains beyond.

With specially designed routes throughout Turin, covering all major tourist attractions, the Hop-on Hop-off Bus is a great way to explore the city.

The fleet of comfortable buses will whisk you between stops, specially chosen to give a comprehensive introduction to Turin’s rich history and dazzling culture.

With audio guides in several languages and unbeatable panoramic views, visitors can get to know this fantastic city in detail.

8) At number 8 is the Piazza Castello

This square is one of the most important and famous Piazzas in Turin and houses many iconic buildings.

Located in the center of the old city, the Piazza Castello is a huge public space that is the life of the city.

Here you can find both the Palazzo Reale and the Palazzo Madama together with the RoyalArmoury and the Royal Theatre.

Furthermore, there is a host of cafes and restaurants and also some beautiful fountains and statues to admire.

7) Number 7 is the Royal Palace of Venaria

Visitors can discover one of the largest and most extravagant palaces in Italy. Surrounded by rolling countryside and perfectly manicured gardens, it is a grandiose spectacle of Baroque architecture.

Inside the palace’s plush interior there are ornate halls with fine art masterpieces brought to life by an audio guide that paints in the story of each work and the history of the palace itself.

At The Art of the Brick, kids and adults alike will be wowed by the scale of sculptures, which were painstakingly built brick by brick.

Visitors can see over 80 constructions made of LEGO® bricks by American artist Nathan Sawaya.

Get up close to Yellow, a life-size sculpture of a man tearing open his own torso, spilling thousands of yellow bricks everywhere.

5) Number 5 is the Lavazza Museum

Visitors can see the history of Lavazza and discover the steps involved in the coffee production process.

Then visit a typical Italian square from the 1960s and enjoy a very special coffee tasting at the end of the tour.

4) At number 4 is Parco del Valentino

Located on the west bank of the River Po that runs through the city, Parco del Valentinois second largest public park in Turin. Created in 1856, it served as the city’s first public garden.

Inside the park, you can find a magnificent Botanical garden, the Valentino Castle, and a replica medieval village.

There are also many footpaths, cycle routes and open pastures, and it is a great place for a walk by the river.

3) Number 3 is the Egyptian Museum

It was established in 1824 and houses one of the largest collections of Egyptian items, with more than 30,000 artifacts.

In recent years it has undergone significant renovation and now incorporates more interactive displays including 3D films that bring to life the brilliance of the advanced and civilized Egyptian culture.

2) At number 2 are The Cathedral and the Holy Shroud

Adjoining the Palazzo Reale, the beautiful Cathedral of San Giovanni Battista was Turinsfirst example of Renaissance architecture and was built between 1492 and 1498.

The cathedral’s main attraction to visitors is the Santa Sindone, Holy Shroud, which is kept in a bullet-proof, fireproof, and climate-controlled vault behind the altar.

There are no bars and no cages at Zoom Torino, simply natural barriers at this educational adventure into the animal kingdom.

Visitors can explore this amazing attraction on foot and meet over 80 different animal species in 9 recreated habitats.

Meet a colony of African Penguins and walk beside them while they swim on a special path. With so much to see and do at Zoom Torino, this is a great day out for all the family.

So that sums up our top 10 things to do in Turin, we hope you enjoyed it.

Top 10 Things To Do In Pattaya