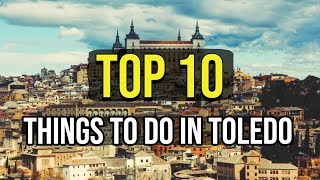 Toledo is an ancient city set up on a hill above the plains of Castilla-La Mancha in central Spain. This magnificent Spanish City is known as the ‘city of three cultures’ and has a wealth of historic monuments that dot the length and breadth of this scenic city.

Toledo’s historic center is a UNESCO World Heritage Site, where a glorious past greets you at every turn, making it the perfect place to see centuries of Spanish history in one city.


Top 10 Things To Do In Toledo

Toledo’s Cathedral is one of the most important places to visit in this beautiful city. It is a grand monument built in a Gothic style and some experts say that this is the best example of High Gothic architecture in Spain.

It was finished towards the end of the 15th century, over 200 years after construction began, and from the rose windows to the flying buttresses, to the pointed arches and ribbed vaults, the Toledo Cathedral is a piece of art itself.

The Hop-on Hop-off Bus Toledo is the best way to see all you want in this magnificent ancient city, home to stunning architecture, world-class museums, and great attractions.

With 9 convenient stops, hop on and off whenever you like, at all of Toledo s best locations for sightseeing. Each bus is equipped with panoramic windows and audio guides giving helpful commentaries along the route.

8) At number 8 is Castle of San Servando

The Castle of San Servando is a medieval castle in Toledo, near the Tagus River.

It begun as a medieval monastery occupied first by monks and later by the Knights Templar.In 1874 the castle was named a national monument. Permission is required for public entrance but visitors can enjoy the splendid view from the outside.

The Monastery of San Juan de Los Reyes is a 15th-century church located on the outskirts of Toledo in Cigarettes.

It was commissioned by Catholic Monarchs, in thanks for the victory at the Battle of Toro. This beautiful building has a main chapel, which is decorated with the coats of arms of the Catholic Monarchs supported by large eagles, stunning arches and the figures of saints.

6) At number 6 is The Museum of Santa Cruz

The Museum of Santa Cruz is one of the most important museums in the city, preserving quality collection that includes archaeological artifacts, decorative artworks, and fine arts.

It was founded by Cardinal Mendoza and is housed in a 16th-century building that originally functioned as a well-equipped hospital. This interesting museum is well worth a visit and is open to the general public from Monday to Saturday.

The Puente de San Martin is a medieval, stone arch bridge that spans the mighty river Tagus. The original was constructed in the Middle Ages, however, the bridge underwent significant modifications in the 13th century.

This five arched bridge has two magnificent towers at either end and was declared a national monument in 1921. From the bridge, there is an excellent panorama of the old town and stunning views along the river.

For a unique experience, get captivated by Toledo’s natural beauty and see more from above on an exciting hot-air balloon ride. Witness the Tagus River as it flows around the Old Town and experience the vast beauty when looking down at the Alcazar, the square stone-fortress in the highest part of Toledo.

This is a relaxing way to enjoy all the sights of Toledo and have a wonderful 360-degree view of the city.

3) Number 3 is the El Greco Museum

This museum is dedicated to El Greco, one of the most important and influential Spanish artists. The museum aims to introduce El Greco not only as a painter but also as an individual.

It explores the deep influence that he had on the shaping of Toledo’s history in the17th century. Of particular interest are a Plan of Toledo, View of Toledo and several male portraits that are on display in the museum.

2) At number 2 is the Cave of Hercules

The Cave of Hercules is a subterranean vaulted space dating back to Roman times and located in the alley of San Ginés in the city.

The cave is under a building where the Church of San Ginés, stood until 1841. Visitors can see the remains left by the Roman water tank, the Visigoth temple and the Romanesque church of San Gines from the 12th century.

The Alcázar is located on the highest part of the city, so it is not only a great place to visit to learn about the history and culture of Toledo, but it is also worth seeing for its stunning panorama.

It was first used as a Roman palace in the 3rd century and it then passed to some of Spain’s royalty before being conquered. Today, it is a museum with various exhibitions that center on the evolution of military strategy and weapons.

So that sums up our top 10 things to do in Toledo, we hope you enjoyed it.