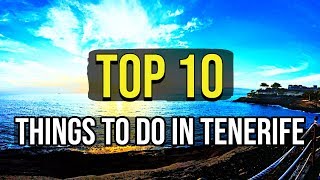 Tenerife is the largest of Spain’s Canary Islands and is located off of West Africa. It is dominated by Mount Teide a dormant volcano that is Spains tallest peak. The coastline has many splendid beaches with sands varying from yellow to black.

From spectacular nature to exciting theme parks, golden beaches to impressive architecture, there are plenty of things to do in Tenerife that the whole family will enjoy.

Loro Parque Zoo is located in Puerto de la Cruz and is one of the most visited attractions in the Canary Islands. Initially dedicated to parrots, the park has now expanded and is home to a diverse range of animals and plants that include whales, sea lions, tigers, chimpanzees, and alligators.

There is also an aquarium, a jungle area, children’s play area and many shows featuring parrots, dolphins and sea lions. Visitors can see thousands of animals in this beautiful tropical park!

Visitors can take the Teide Cable Car 1,200 meters up to the top of Mount Teide, a dormant volcano and UNESCO World Heritage Site. Enjoy stunning views from the specially refurbished cable car as it completes its 8-minute journey to the upper station.

There you can check out the local flora and fauna, many of which are completely unique to the island, admire the wildlife, and even climb up to the very summit before you eventually glide back down.

8) At number 8 is Whale and Dolphin Watching

A whale and dolphin watching tour off the coast of Tenerife is one of the best ways to watch whales and dolphins in their natural environment.

Bottlenose dolphins, Sperm whales, and Pilot whales are all resident in the waters around the Canary Islands with other species such as the Killer Whales, Mike Whales and the Striped Dolphins occasionally migrating into the waters. You may also see turtles, sharks, osprey, and kestrels while out on the water.

Cueva del Viento is a set of caves that were created by lava from the eruption of the PicoViejo volcano. There are 18km of lava tubes, which you can explore with a tour guide.

While walking through the maze of underground tunnels you will discover fossils, lava stalactites, lava lakes and at least 190 species of different insects that live in the tunnels.

6) At number 6 Tour the Tenerife Auditorium

The Tenerife Auditorium is an iconic modern art sculpture, created in a grand architectural style by the internationally renowned Spanish architect Santiago Calatrava. One of the finest buildings in the Canary Islands, the venue frequently hosts talks, exhibitions, and music events. Guided multilingual tours will take you behind the scenes of this remarkable building.

5) Number 5 is the Teide Observatory

At Teide’s famous observatory visitors can gaze out over the stunning volcanic island scenery, before peering into the depths of space with the super-powered telescopes.

Learn about the importance of astrophysics and solar observation in the interactive workshops and then safely stare at our own sun like never before. Youll be able to see real sunspots and solar flares with a view that’s really out of this world!

4) At number 4 are the Pyramids of Guimar

The Pyramids of Guimar Ethnographic Park is home to a mysterious group of stone pyramids that were first discovered in the 1990s and have various theories surrounding their origin.

The Museum at the park explores the scientific and archaeological investigations that have taken place at Guimar. These 12-meter towers built from volcanic Tenerife rock are a sight to behold and a must-see on the island.

Jungle Park is one of Tenerife’s most impressive zoological and botanical parks and is located in Arona about 5 minutes from Los Cristianos.

The Park has around 75,000 m² of jungle containing various walks with tunnels, suspension bridges, waterfalls, lagoons, and caves. Jungle Park is home to a large variety of animals and boasts spectacular daily shows featuring exotic birds and birds of prey.

2) At number 2 is The Museum of Nature and Man

The Museum of Nature and Man in Santa Cruz contains many important artifacts related to the history of the Canary Islands. It has a large collection of native tools and carvings, as well as well-preserved mummies from around the world.

The conservation work done by the museum is important and visitors have a unique chance to discover the largest existing collection of the aboriginal culture of ancient Tenerife.

Siam Park is a Thai themed water park in Costa Adeje, covering 48 acres. It has one of the largest collection of Thai buildings outside of Thailand and a great selection of waterslides and rides, both family-friendly and adrenaline filled.

Alongside the water slides, there is the Lost City, a children’s play area with over 120 different games, a Thai floating market, Siam Beach, a wave pool that offers surfing lessons, and various Thai restaurants to enjoy. Siam Park definitely delivers thrills and spills for the whole family.

So that sums up our top 10 things to do in Tenerife, we hope you enjoyed it.

Top 10 Things To Do In Pattaya

Top 10 Things To Do In Gothenburg Sweden