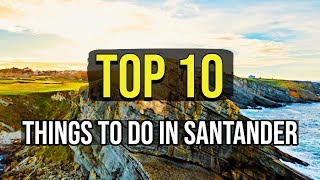 Santander is the capital of Spain’s Cantabria region and is located at the mouth of the Bay of Santander on the rocky La Magdalena Peninsula.

It is a seaside city that’s considered to be one of the most beautiful and elegant cities in northern Spain and offers a whole host of attractions for visitors, from museums to art centers and stunning beaches.

The Palace of La Magdalena is situated on the vast Magdalena Peninsula, on the edge of the city, and has become a symbol of Santander.

Built between 1908 and 1912, it is one of the best examples of this style of architecture in northern Spain.

The palace was used as a summer residence for the Spanish royal family between 1913and 1930, and today is open for visitors and grand events.

With 9 bus stops throughout Santander, covering all major tourist attractions, the Hop-on Hop-off Bus is a great way to explore the city.

The scenic route has been specially chosen to give a comprehensive introduction to Santandersrich history and dazzling culture.

With audio guides and unbeatable panoramic views, visitors can get to know the ins and outs of this fantastic city.

8) At number 8 is the Museum Centro Botín

The Centro Botín is Santander’s newest arts center, housed in a futuristic-looking spaceship-like building. The center specializes in contemporary arts, and its exhibits comprise everything from video and photography, to painting and sculpture.

You can see works here by international artists and discover a collection of modern art masterpieces.

One of the most impressive buildings in the city is the Santander Cathedral, which simply can’t be missed.

It was originally built in the 13th century, although the upper part of the cathedral dates from the 14th century, and the cloisters were built later.

Inside, you can find the tomb of the writer, literary critic, and historian Menéndez Pelayo.

6) At number 6 is the Maritime Museum of Cantabria

Santander has a strong relationship with the sea and an important maritime heritage. One of the best places to learn about this is the Maritime Museum of Cantabria, located next to Los Peligros Beach.

This venue offers a fascinating look at different areas of the underwater and maritime world.

With over 3,000 square meters, it aims to show the relationship between man and the maritime world throughout history.

5) Number 5 are the Gardens of Pereda

The beautiful Gardens of Pereda are named after the 19th-century Cantabrian writer JoséMaría de Pereda, and sit alongside the seafront promenade.

Filled with walkways, palms, and pavilions, they make a perfect place for a relaxing stroll.

4) At number 4 is Santanders Planetarium

Visitors can discover the fascinating world of astronomy at Santanders Planetarium. The impressive building is found at the Santander Nautic University and exhibits about galaxies, solar systems, and constellations offer interesting scientific insights about everything seen in the night sky and beyond.

Located on the edge of the Bay of Santander, La Magdalena Peninsula offers a range of experiences. There is plenty to do in this 69-acre park.

Enjoy the sea and wildlife in the Marine Park with its small zoo, or marvel over the three beautifully intact and fascinating galleons sailed by Spanish mariner Vital Alsar Ramírez.

There are also two beaches to enjoy, as well as a lighthouse on site.

2) At number 2 is the Museum of Prehistory and Archaeology

The Museum of Prehistory and Archaeology of Cantabria is located in the center of the city, close to the Bay of Santander.

The museum has a collection of 1,200 artifacts and remains, discovered in archaeological excavations in Cantabria, including stone and bone objects collected from various caves and sites in the region.

An exhibit of Roman art and funerary objects is also on display.

1) And at number 1 is Cabárceno Nature Park

Cabárceno Nature Park is no ordinary zoo, it is a man-made nature area, created from the primitive beauty of the landscape.

Located in the green hills 20 minutes south of Santander it is home to around a hundred animal species, living in semi-freedom in large enclosures.

Covering more than 1,900 acres in a beautiful environment of meadows and hardwood forest, visitors can see wild boars and Cantabrian brown bears, and then lions, cheetahs, elephants, and gorillas.

So that sums up our top 10 things to do in Santander, we hope you enjoyed it.