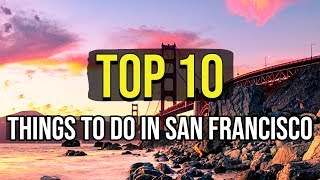 San Francisco, in California, is located on the tip of a peninsula surrounded by the pacific ocean and San Francisco Bay. With rolling hills and the iconic Golden Gate Bridge, San Francisco is one of the most beautiful cities in the United States and the jewel of Northern California.

The city shot to fame in 1849 as the home of the Californian Gold Rush, which at the time made it the largest city on the West Coast. Now known for its world-famous landmarks, unique architecture and incredible attractions, the area is a hub of excitement and the cultural, commercial and financial heart of northern California.

San Francisco is also one of America’s great walking cities, with lots of pathways and cycling trails, and so many interesting sights to see and explore, this is the city that has everything, making it a fantastic place to visit.

Top 10 Things To Do In San Francisco

Once an area of sand dunes, the Golden Gate Park is now home to gardens and museums and is a fabulous green space in the heart of San Francisco. At 1,017 acres, the park stretches for almost 50 city blocks from the middle of the city to the foot of the bridge.

Some of the main attractions within the park include the de Young Museum, the CaliforniaAcademy of Sciences Museum and the San Francisco Botanical Garden. One of the most popular attractions is the Japanese Tea Garden with beautiful plants, ponds, bridges, and Japanese-style structures including the teahouse.

The park also has an interesting network of walking trails and cycling paths, several lakes, bridle paths, and even a buffalo paddock.

Golden Gate Park is one of those places that can easily take up a couple of hours or a couple of days. Bike rentals are available, and this can be a good way to explore the park, rather than trying to do everything on foot. With so many areas to explore it’s good to ensure that you have plenty of time for your visit.

The city is well known for its steep hills and this street is no exception, with eight sharp hairpin turns in 180 meters, it would simply be too steep to tackle in a straight line. One of the most popular things do by visitors is to hike all the way up the curves, and smell the beautiful flowers planted in the beds along the way.

But to get the full experience of snaking and braking down this zigzagging road, itis definitely more thrilling to drive down the one-way street from the top. You can also ride a cable car up the hill and get splendid views, and then traverse down on foot.

This iconic street, featured in many movies, is also a popular spot for photographers, as you can capture both the entire winding street from the bottom as well as the spectacular view from the top. Additionally, you can look out over the city landscape, which includes the Bay Bridge and Coit Tower.

8) At number 8 is the Aquarium Of The Bay

Discover the beauty and diversity of Northern Californian aquatic life at the Aquarium of the bay. Located on the historic San Francisco waterfront at PIER 39, the Aquarium is home to more than20,000 marine animals ranging from eight-foot native sharks to rays, jellies, and even river otters, all of which can be found in the San Francisco Bay or along the California coastline.

With a focus on education, conservation, and entertainment, the Aquarium of the Bay’s exhibition space is organized as a series of experiences that invite visitors to both observe and touch the animals on display.

There are four main exhibit areas for guests to explore the first-named ‘Discover the bay’ highlights some of the animals that are commonly found closest to shore, right off of San Francisco’s docks.‘Under the Bay’ is the Aquarium’s main and most iconic exhibit area, and when visitors first enter they step into a tranquil environment where they discover a mesmerizing jelly exhibit, featuring moon jellies, Pacific sea nettles and more.‘Touch the Bay’ offers a hands-on experience for Aquarium visitors and guests can touch juvenile bat rays, and even sharks in the exhibits first touch pool.

Finally, guests will see the Aquarium’s newest exhibit, the ‘River Otters. This exhibit features playful river otters in a serene environment that is a combination of land and water habitats. The exhibit includes two freshwater pools, a river stream, plus plenty of dry land and dig pits for the otters to enjoy. This amazing aquarium has a mission to protect the bay and the animals that live in there and is well worth a visit!

7) Number 7 is the Palace of Fine Arts

The Palace of Fine Arts is easily one of the most beautiful places to visit in all of SanFrancisco and is the last remaining structure from the 1915 Panama Pacific Exposition. Listed on the National Register of Historic Places, this classical looking building with a French-inspired domed structure, is beautifully situated on a lagoon that reflects the mirror image on the surface of the calm water, while ducks and geese drift by.

The palace has been restored, along with the grounds and today hosts art exhibitions and performances. The Palace of Fine Arts Theatre seats approximately 1,000 patrons and offers a variety of shows, musicals, and cultural events.

Cable Cars were introduced in 1873 to help locals contend with the many hills the city is built on. Today, the few remaining cable cars offer visitors a great way to explore the city in historic fashion. Since 1964, these tram-like vehicles have had the unique distinction of being the only public transport system to be declared a historic monument.

The world-famous Cable Cars run on three lines in the steep streets of San Francisco between Market Street and Fisherman’s Wharf. These cars are a fun ride, especially if you get to stand on the running board.

San Francisco is very proud of its cable car system, as it is the last manually operated system in the world today. At its peak, there were 23 cable car lines in the city, but today there are just three left.

The cable car system forms part of the urban transport network operated by the San FranciscoMunicipal Railway and if you are planning on more than a couple of rides or are going to be sightseeing for a few days, it is a good idea to buy a pass.

5) The sixth is the Transamerica Pyramid

Big cities across the world are recognizable due to their unique architecture and distinguishable skylines and San Francisco is no exception. Though visitors can easily pick out the Transamerica Pyramid from photographs of San Francisco, it’s more than just another building.

The Transamerica Pyramid is a building that is famous for its futuristic architectural style. Located in the heart of the Financial District, the iconic Pyramid is San Francisco’s other famous symbol beside the Golden Gate Bridge.

Finished in 1972, the Transamerica Pyramid has a height of 260 meters and is now the second tallest building on the San Francisco skyline. This looming landmark features a white quartz exterior and more than 3,000 windows.

Visitors can see the view from the 48th floor from 24-hour camera feeds displayed in the Visitor Centre, located on the Plaza Level off of Clay Street, which is well worth a look!

4) At number 4 is a visit to Alcatraz

Often referred to as The Rock, the small island of Alcatraz has served as a lighthouse, a military fortification, and as a prison. It was home to some of the most notorious criminals of the time including Al Capone and Machine Gun Kelly.

In the course of its 30-year existence, the penitentiary received a total of 1,576 convicts. There were never more than 250 at any one time, even though there were 450 cells measuring about 10ft x 4ft. At times the number of guards and staff was greater than the number of convicts.

Surrounded by the swirling currents and freezing water of San Francisco Bay, Alcatraz was believed to be inescapable. Since its closure in 1963, Alcatraz has become a national landmark operated by the NationalPark Service and welcomes over 1 million visitors a year.

You can take a ferry over to the island and the informative pre-recorded audio tours are strongly recommended, as they allow you to learn about the prison as you roam the grounds at your own pace. As one of the most popular places to visit, this amazing experience is definitely one not to be missed in San Francisco.

The Twin Peaks in San Francisco are a world-famous tourist attraction and offer spectacular views of the Bay Area. These famous grassy hills rise 922 feet from the ground, making them the second-highest point in the city after Mount Davidson.

The two peaks are adjacent to each other and from the top, visitors can view multiple SanFrancisco landmarks, including the Bay Bridge and the downtown skyscrapers. The Twin Peaks are open from 5 a.m. to midnight and there is free parking at the top of TwinPeaks Boulevard.

It is best to stay on the marked trails and dress for windy conditions if you are planning to hike to the top. There are pathways up to the top of both peaks and they’ve recently been improved with rustic wooden stairs. Although there are some relatively steep ascents and descents on some of the trails, the fantastic views are definitely worth it.

2) At number 2 is Fishermans Wharf

One of the most popular tourist areas in San Francisco, Fisherman’s Wharf runs all the way from Pier 39, with the famous colony of cheeky sea lions, through to Municipal Pier at the end of Aquatic Park.

The wharf is rich in history and for over a century its historic waterfront was once the hub of San Francisco’s fishing fleet. It’s now a fun place to stroll around and get a taste for the city with its beautiful setting along the waterfront.

A diverse number of restaurants are also available, offering some of the freshest seafood in the city, with most caught just beyond the docks. Other tourist attractions at the wharf include lots of museums, souvenir stores, historical buildings and fantastic scenic views over the Bay.

1) And the top spot is the famous Golden Gate Bridge

The Golden Gate Bridge was the longest suspension bridge in the world when it was completed in 1937 measuring approximately two kilometers in length. It has become an internationally recognized symbol of San Francisco and a must-see place of interest.

The bridge took four years to build and spans the Golden Gate, the straits between San Francisco and Marin County to the north. With its distinctive red metalwork, on sunny days it transfixes crowds with a radiant glow, which is maintained by the painters that apply 1,000 gallons of red-orange paint every week.

Visitors can drive over the Golden Gate Bridge or use the walkways on either side of the bridge that is open to pedestrians and cyclists. The walk begins at the start of the bridge accessible from the Presidio shuttle and ends with a viewpoint in Marin County.

At night, the floodlit structure is equally striking but the bridge is only open to pedestrians and cyclists during daylight hours.

So that sums up our top 10 things to do in San Francisco, we hope you enjoyed it.

Top 10 Things To Do In Pisa