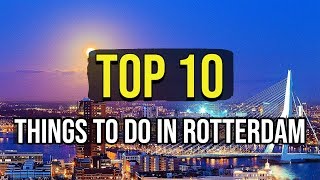 Rotterdam is a major port city in the Dutch province of South Holland and the second-largest city in the Netherlands. The city dates back to medieval times and was already prosperous by the 13th century, when a dam was built to separate the Rotte from the Nieuwe Maas.

Today, it is popular for its vibrant entertainment options, it’s many fine museums, splendid architecture, and maritime tourist attractions.

Rotterdam Zoo is one of Europe’s most beautiful zoos and a naturalistic oasis where you can see creatures from around the world. The zoo is split into several different themed areas including a Chinese garden, a MalayaForest, Mongolian Steppes, and a Crocodile River.

This zoo really is a fantastic place for both children and adults alike and the wide variety of enclosures and interactive elements will provide hours of fun. Rotterdam Zoo is dedicated to conservation, so a visit here supports wild populations of elephants, pandas, Indian rhinos, and polar bears.

The Hop-on Hop-off Bus Rotterdam is the best way to see all you want in this large port city, home to stunning architecture, world-class museums, and great attractions. From the Euromast to the historic harbor district, hop on and off whenever you like, at all of Rotterdam s best, most convenient locations for sightseeing.

8) At number 8 is a visit to Kinderdijk

On the River Noord, just 23 kilometers east of Rotterdam, is the beautiful little village of Kinderdijk. Each of its 19 perfectly preserved 18th-century windmills is designated as a UNESCO world heritage site.

Built between 1722 and 1761, together they comprise the largest surviving concentration of windmills in the country, a history that’s celebrated during special Mill Days, when their sails are once again set in motion.

7) Number 7 is the Stedelijk Museum

This atmospheric art museum was the St. Jacobs Hospital in the 18th and 19th centuries and is well worth a visit.

It’s now home to modern and contemporary Dutch visual art, including an impressive collection of artworks from the COBRA movement, an avant-garde movement involving artists from Denmark, Belgium, and the Netherlands in the years between 1948 to 1951.

6) At number 6 is Miniworld Rotterdam

With the lighting changing every 24 minutes to simulate day and night, this is an exciting, unique experience for the whole family.

5) At number 5 is Feyenoord Stadium Tour

The Feyenoord Stadium, which opened in 1937, was thoroughly renovated in 1994 and is now a listed city monument. Visitors can go behind the scenes, sit in the head coach’s seat, walk through the DeKuip tunnel onto the pitch and more!

Then find out about the proud history of the club and stadium, at the Feyenoord Museumthat’s full of fun facts.

4) Number 4 is the Maritime Museum Rotterdam

The Rotterdam Maritime Museum is located in central Rotterdam, near the Markthal and was founded back in 1874. It is one of the largest of its type in the world with a huge collection of cartography, maritime memorabilia, and art.

Its world-class collection explores the impact oceans have on our lives and contains over850,000 artifacts, celebrating six centuries of watery history. Visitors can discover a world of exploration and discovery, with hands-on interactive exhibits and the child-friendly Bright Minds Expedition.

3) At number 3 is the Erasmus Bridge

This famous suspension bridge connects the northern and southern banks of the river Maasin Rotterdam’s city center. The length of this impressive bridge stretches to an immense 802meters making it the second largest in the Netherlands.

The bridge is nicknamed the Swan due to its large upright mast that resembles the neck of a swan. This feat of modern engineering creates an impressive backdrop to the port of Rotterdam and is a fine construction to admire and walk across.

One of Rotterdam’s most distinctive landmarks, the Euromast lies at the north entrance to the Maas Tunnel. The Tower is an observation station that was created in 1960 to provide panoramic views of the Rotterdam Cityscape.

It stands at 606ft tall and with its antenna, it is the tallest building in Rotterdam. The views from the Crows Nest viewing platform are absolutely amazing and on a good day, you can see for over 30km!

1) And at number 1 is the Rotterdam Harbour Cruise

Characterized by cutting-edge architecture, Rotterdam’s breathtaking skyline is best admired from the water. Hop aboard a ship and take in Europes biggest harbor, for an animated and inspiring journey.

Discover Rotterdam’s historic Maritime Quarter and cruise the busy waterways around this large port, and see some of Holland’s historical highlights along the way, as well as the SS Rotterdam, the famous 1950s ship.

So that sums up our top 10 things to do in Rotterdam, we hope you enjoyed it.

Top 10 Things To Do In Moscow