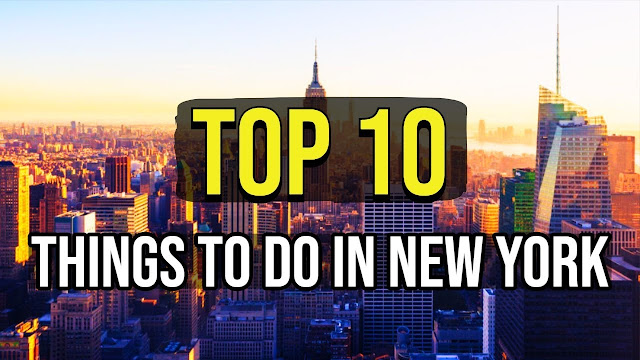 New York City is situated in the north-eastern United States approximately halfway between Washington D.C. and Boston. The geography of New York City is characterized by its coastal position at the meeting of the Hudson River and the Atlantic Ocean in one of the world’s largest natural harbors.

Most of New York City is built on the three islands consisting of Long Island, Manhattan and Staten Island.

With the city’s ancient bedrock providing the immovable foundation for the hundreds of modern skyscrapers that dominate the skyline. A global power city, New York has been described as the cultural, financial, and media capital of the world.

Often referred to as the Big Apple, with its iconic sites that include the Empire state building, Times Square and sprawling Central Park, this fascinating city has an energy that is captivating!

Top 10 Things To Do In New York City

Central Park is an urban park in Manhattan and is located between the Upper West Side and Upper East Side, roughly bounded by Fifth Avenue in the east. When Central Park first opened in the winter of 1859, it was one of the first artificially landscaped parks in the United States.

The completed historical landmark officially opened in 1876, and it is still one of the greatest achievements in artificial landscaping today attracting millions of visitors from all over the world every year. The park’s terrain and vegetation are highly varied and range from flat grassy areas, gentle slopes, and shady glens, to steep, rocky ravines.

It’s 843 acres of green space features running paths, an open-air theatre, a boating lake, ponds, a zoo, several fountains, statues, gardens, a skating rink, and many children playgrounds. The area is a great place for picnicking, listening to music and exploration, and with so much to see this famous park is definitely a top New York attraction!

9) Number 9, is the famous The Empire State Building

The Empire State Building is a 102-story Art Deco skyscraper in Midtown Manhattan that was completed in 1931. The building has a roof height of 1,250 feet and stands a total of 1,454 feet tall, including its antenna. Looking up at New Yorks skyscrapers is quite an experience, but its nothing compared to looking down on New York from the viewing area of its most famous skyscraper.

With ongoing exhibitions and two observation decks, the Empire State Building is the best way to see the Empire State. As one of America’s true icons, it was designated a National Historic Landmark in 1986 and offers unobstructed panoramic views of New York City and beyond from 8 a.m. until 2 a.m. daily.

The 86th and 102nd-floor observation decks have two of the highest viewing positions in New York City with panoramic views of up to five states from the surrounding open-air promenade and climate-controlled viewing galleries.

8) At number 8 is the New York Aquarium

The New York Aquarium is the oldest continually operating aquarium in the United States, having opened in Castle Garden in Battery Park, Manhattan in 1896. Since 1957, it has been located on the boardwalk in Coney Island, Brooklyn.

The Aquarium offers an intimate peek into the underwater world with a variety of aquatic displays starring penguins, sea lions, sharks and more. From the sea lion shows to the conservation-minded displays of Glover’s Reef, their plenty to keep the most budding marine biologists transfixed for hours.

Visitors can get a snorkel’s-eye view of colorful reef-dwelling marine life, including eels, rays, and clownfish, then get wrapped up in the 4-D theatre experience, which combines3-D film with sensory technology. This attraction is a great day out for families and everyone will be pleased to hear that the Aquarium is a leading voice in local marine conservation issues, committed to preserving safe places for people and wildlife to share the waters that surround this city of islands.

7) At number 7 is One World Observatory

After almost a decade of construction between 2006 and 2015, one of the tallest buildings in the Western Hemisphere took its place on the north-west corner of the World Trade Centre site. Designed by master architect David Childs the One World Trade Centre is a spectacular glass and steel monolith, reaching 1,776 feet into the sky.

Inside this amazing building, visitors are greeted with a slick exhibit detailing the tower’s development, before being whisked into a screen lined elevator, where you ll be treated to a time-lapse history of New York as you glide upwards.

Of course, the real highlight is waiting at the top with the three-story observatory that is absolutely stunning, offering unprecedented panoramic views of this great city. Enjoy breathtaking scenes of New York City and beyond with views stretching over 50 miles into the distance.

Then check out the Sky Walk, which broadcasts real-time video onto the walls and floor, allowing you to get a birds-eye view of the city below including the Upper New York Bay and the Statue of Liberty, as well as the Brooklyn Bridge and the cluster of Midtown skyscrapers.

6) At number 6 is the Brooklyn Bridge

When the Brooklyn Bridge was constructed in 1883, extending 1,595 feet across the EastRiver, connecting lower Manhattan to Brooklyn Heights, it was the longest steel-wire suspension bridge in the world and at that time it was also the first permanent crossing on the EastRiver.Now, it’s a historic staple in the New York City skyline, transporting commuter car traffic underneath and foot traffic above.

As one of the most famous bridges in the world the Brooklyn Bridge is not only aesthetically pleasing, it makes for a great walk. The structure’s sense of drama comes from its two neo-Gothic towers, composed of limestone and granite and rising to 84 meters and anchoring the intricate cable system.

The Brooklyn Bridge is best crossed as a pedestrian on the elevated walkway above the road and through the very center of the towers, for satisfying views of New York’s silhouette and the cables overhead.

The Museum’s 110,000 square feet of exhibition space is located within the archaeological heart of the World Trade Centre site. It tells the story of 9/11 through multimedia displays, archives, narratives and a collection of monumental and authentic artifacts.

The lives of every victim of the 2001 and 1993 attacks are commemorated as visitors have the opportunity to learn about the lives of the men, women, and children who died. Reflecting Absence, the memorial design has two pools dug into the footprints of the twin towers, symbolizing the loss of innocent lives on 11 September 2001.

The three-part historical exhibition in the museum extensively details the before, during, and after 9/11. The Museum has a collection of over 10,000 artifacts from Ground Zero, including a section of antenna from the roof of the North Tower, and the remains of a fire truck.

The monumental artifacts of the Museum provide a link to the events of 9/11, while presenting intimate stories of loss, compassion, reckoning, and recovery that are central to telling the story of the attacks and the aftermath. Somber but necessary, the National 9/11 Memorial and Museum is on the site of the World trade center and is important for any visitor.

The Bronx Zoo is located within Bronx Park in the Bronx, a borough of New York City. It is one of the largest zoos in the United States by area, comprising 265 acres of parklands and naturalistic habitats separated by the Bronx River.

The Zoo is teeming with wildlife including alligators, baboons, and camels and more than6000 animals call it home. Highlights of a day at the zoo include the lions and zebras on the African Plains, the eagles and owls of the Birds of Prey exhibit, and the Congo Gorilla Forest.

The Children’s Zoo is a great place for kids to safely get up-close and personal with some unfamiliar creatures, like anteaters and sloths, as well as the petting zoo favorite, the mini goat. The Bronx Zoo is one of the oldest zoos in the country and has been conservation-minded throughout history and in the early 20th century the American great plains were restocked using Bronx-bred bison.

Bronx Zoo is a great day out for all the family to enjoy especially the regular feedings scheduled throughout the day, including the sea lions and penguins, which are great fun to watch!

Conceived in 1943 by master architect Frank Lloyd Wright, The Solomon R. Guggenheim Museum opened to the public in 1959 and changed the world of modern art.Its design is still as cutting-edge as it was in the 50s, with its gracefully spiraling ramp reaching gently into the spectacular domed-glass ceiling.

The iconic building houses Solomon R. Guggenheim’s modern art collection, which includes paintings by Kandinsky, plus works by Picasso, Klee, Miró, and more. Completely contrasting the strict Manhattan city grid, the organic curves of the museum are a famous landmark for both art lovers, visitors, and pedestrians alike.

With guided tours, downloadable audio guides and interactive augmented reality mobile apps, its an appropriately contemporary experience and a must-see for lovers of art and architecture.

Times Square, the most bustling square of New York is known for its many Broadway theatres, cinemas, and electronic billboards. It is one of those places that make New York, a city that never sleeps. The neon lights and video billboards of Times Square are one of New York City’s most well-known landmarks.

Many people come to Times Square for the ambiance and the billboard spectacle, but there are also many restaurants and shops, well over 100 in the area. The most famous building at the square is the iconic Paramount Building.

The building was home to the Paramount Theatre where stars such as Fred Astaire, Bing Crosby, and Frank Sinatra performed in their heyday. This triangular intersection between Broadway, 42nd Street, and Seventh Avenue is home to the Big Apple’s famous theatres, an essential Manhattan experience.

In addition to its role as the hub of the theatre world, Times Square is home to numerous other attractions, many perfect for families.

1) And at number 1 is The Statue of Liberty exhibit

New York’s Statue of Liberty was a gift of international friendship from France to theUnited States and is one of the most universal symbols of democracy. The 93-meter Statue of Liberty depicts the Roman goddess Libertas, striding free of the shackles at her feet, holding aloft a torch in her right hand and carrying a tablet in her left hand bearing the date of the Declaration of Independence.

From 1886, immigrants making the voyage to New York for a new life would be greeted by this inspiring symbol of freedom. The Statue of Liberty exhibit, which opened in July 1986 is located on the second floor on the pedestal of the Statue. It traces the history and symbolism of the Statue of Liberty through museum objects, photographs, prints, videos, and oral histories.

In addition to historical artifacts and descriptive text, full scale replicas of the Statuesface and foot are also on display. The queues for the ferry and Statue of Liberty Museum on Liberty Island can be long so it’ swell worth getting a ticket beforehand.

Trips to the top of the crown are highly in demand, so it’s advisable to book well in advance for this amazing New York experience.

So that sums up our top 10 things to do in New York City, we hope you enjoyed it.

Top 10 Things To Do In Las Vegas

Top 10 Things To Do In Birmingham