Skip to content
Travelling
New Orleans is one of the world’s most fascinating cities, it is home to a truly unique melting pot of culture, food, and music. Situated on a bend of the Mississippi River 100 miles from its mouth, New Orleans has been the chief city of Louisiana, and the Gulf of Mexico’s busiest northern port, since the early 1700s.

Founded by the French, ruled for 40 years by the Spanish and bought by the United States in the 1803 Louisiana Purchase, New Orleans is known for its vibrant history. The city is a blend of cultures that truly comes together and creates a very special place to be.

Music lovers, especially fans of jazz will be in heaven in the city, but food lovers and art buffs are equally well catered for. Embodying its festive spirit is Mardi Gras, the late-winter carnival that is famed for its costumed parades and street parties.

Despite its lively buzz, you will not struggle to find a green space to chill out in, with beautiful parks in the area you can surround yourself with many famous old oak trees. New Orleans is also known as a great walking city, with many attractions located in or near the French Quarter, but to explore you may want to hop on a historic streetcar. 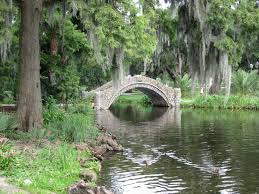 Sitting north of central New Orleans near the southern shore of Lake Pontchartrain, City Park is open daily from sunrise to sunset. The Park is without a doubt one of the best urban parks in the United States.

Stretched out over an incredibly vast 1,300 acres, City Park is one of the oldest in the country. Founded in 1854, the grassy oasis attracts millions of visitors every year. It is an eclectic mix of trees and flowers, with large oaks and Spanish moss, it is a masterpiece of urban planning. At three miles long and 1 mile wide the park is dotted with gardens, waterways, and bridges and is home to a captivating art museum.

With so much to do and see here, it’s a great place to visit and is New Orleans’ prettiest green space.

Constructed in Moss Point, Mississippi, the Paddlewheeler Creole Queen took her maiden voyage in 1983. Visitors can hop aboard this luxurious boat and be transported to the olden days of NewOrleans.The Creole Queen is an authentic paddle wheeler, powered by a 24-ft diameter paddlewheel that takes guests on the day and night cruises for a totally different view of the Crescent City from the Mississippi River.

She has three private dining rooms giving her the largest indoor capacity available on excursion vessels in New Orleans. As you pass famous landmarks and parts of the city, your onboard guide will detail the founding of present-day New Orleans and the expansion of the city.

At the historic Chalmette Battlefield, on some cruises, you’ll dock and disembark for some on-foot exploration. This brilliant journey is more than a cruise along the river, it’s a cruise through 300years of unique history.

8) At number 8 are the New Orleans Streetcars

Streetcars in New Orleans have been an integral part of the city’s public transportation network since the first half of the 19th century and getting around New Orleans by streetcar is a great way to see the city.

There are three different lines: St. Charles, Canal Street, and the Riverfront, each of which originates downtown but takes you to different parts of the city. The views of historic architecture beneath the shade of massive, ancient oaks convey so much about the charm and character of New Orleans.

As streetcars glide along past stately mansions and interesting scenery, they offer up relaxing views of the beauty and the story of the city. When riders board these historic vehicles, they are boarding a piece of movable New Orleans history..

7) At number 7 is the Audubon Aquarium of the Americas

Located along the waterfront in downtown New Orleans, within walking distance of the FrenchQuarter, Audubon Aquarium of the Americas immerses you in an underwater world.

The venue is home to an immense collection of exquisite marine species including otters, stingrays and hundreds of tropical fish. The aquarium focuses on species found in North, Central and South America, and visitors can learn about creatures that lurk below the surface of the nearby surrounding waters, with exhibits that highlight the freshwater fish of the Mississippi River. The Great Maya Reef exhibit can be viewed from a 30-foot long walk-through the tunnel and is designed to look like a sunken Maya city, with fish swimming among the ruins.

Extremely popular is the Gulf of Mexico exhibit with its sharks and tarpons within a tank holding over 400,000 gallons of water. Always a favorite is the sea otters and penguins, as well as the fascinating wildlife encounter programs.

Available as optional extras are hands-on experiences with the African penguins and a chance to SCUBA dive or snorkel. The aquarium is open seven days a week from 10am to 5pm and is great for a family day out!

6) Number 6 is a stroll around the French Quarter

Set along a bend on the Mississippi River, the oldest neighborhood in New Orleans is also one of its liveliest. The French Quarter is home to some of the city’s iconic landmarks as well as a great variety of restaurants, shops, bars and concert venues.

This fun and exciting neighborhood has everything from the party vibe of Bourbon Street to the elegance found on Royal Street. Also not to be missed in the French Quarter are Jackson Square and St Louis Cathedral, located just off the waterfront.

Visitors to the area can enjoy views of stunning architecture with balconies adorned with intricate ironwork to beautiful gardens. The old buildings, some of which date back 300 years, show French influences, with arcades, wrought iron balconies, red-tiled roofs, and picturesque courtyards. Many of these buildings now contain hotels, restaurants, souvenir shops, galleries, and a collection of jazz venues.

5) At number 5 is Louisiana State Museum at the Cabildo

This elegant Spanish colonial building stands next to St. Louis Cathedral and houses many rare artifacts of America’s history. The Cabildo is one of the most historically significant buildings in America.

Built between 1795 and 1799 to replace a structure that burned in the 1794 fire, the Cabildo served as the seat of government during the Spanish colonial period. Today, the Cabildo houses the Louisiana State Museum that showcases the rich and colorful history of New Orleans and Louisiana.

The region’s unique cultural blend is reflected in the Cabildo’s permanent and changing exhibits, which include both famous historical figures and ordinary inhabitants. There are more than five hundred artifacts and original works of art in the building including The Battle of New Orleans, Eugene Louis Lami’s huge 1839 painting depicting the final battle of the War of 1812.

Also on display is the mold for Napoleon’s death mask, crafted shortly after the French leader’s death in 1821. Portraits of famous Louisiana figures and many interactive displays, all of which tell the story of Louisiana and its place in American history, can be found throughout this interesting museum.

On the north side of Jackson Square is the iconic St Louis Cathedral, a landmark structure in New Orleans. It was built in 1794 on the site of two earlier churches and ranks among the oldest in theUnited States.

The Cathedral is seen as one of the best examples of French architecture in the country, with triple spires, this beautiful 18th-century cathedral is dedicated to Louis IX, the French king sainted in 1297.

With its stunning French façade, Pope Paul VI awarded the cathedral the rank of minor basilica in 1964. Reachable via the Riverfront Streetcar to the Dumaine Station, The St. Louis Cathedral is free and open to the public every day from 8:30 a.m. to 4 p.m.You can purchase a brochure for a self-guided tour at the entrance, or you can join a guided tour. Tours are led by volunteers and are available upon request.

The 100-year-old New Orleans Museum of Art sits inside the 1,300 acre City Park in the-City area of town and contains one of the finest collections in the South. When it opened, the museum had only 9 pieces of art but now has more than 40,000.

The building itself is imposing and grand with its alabaster walls and Greco-Roman columns. In true homage to New Orleans, the museum focuses mainly on French and American artworks across a range of media including photography, sculptures, and glasswork.

The museum also has a smaller but impressive collection of African art and temporary exhibitions with a variety of themes.On-site and another of the institution’s highlights is the beautiful five-acre sculpture garden, with more than 60 sculptures, as well as walking paths, lagoons, and mature live oak trees.

There are 3 St. Louis Cemeteries in New Orleans, but the oldest cemetery is St. Louis CemeteryNumber 1, which happens to be the closest to the French Quarter. Consecrated in 1789, this most historical cemetery holds the graves of several notable figures including Marie Laveau, the infamous Voodoo Queen.

New Orleans inters it’s dead a little differently than the rest of the country. Due to the city’s high water table, coffins are safeguarded in mausoleums instead of being buried, creating eerily beautiful cities of the dead.

With over two centuries of history, St Louis Cemetery is one way to spend a lively afternoon or evening, however, under rules set by the Archdiocese of New Orleans a licensed tour guide must accompany all visitors to St. Louis Cemetery No. 1.

1) And at Number 1 is the Audubon Zoo

Audubon Zoo is a New Orleans landmark and a living museum filled with some of the rarest and most beautiful creatures of nature. There have been animals at this site since the 1884 World Exposition in Audubon Park.

Today, Audubon Zoo is 58 acres of animals in their natural habitats and the Zoo consistently ranks among this country’s best. Found on Magazine Street in historic Uptown New Orleans, the zoo is home to more than2,000 animals and offers an exotic mix of animals from around the globe.

.Some of the most popular residents of the zoo are the giraffes, jaguars, leopards, elephants, rhinos, lemurs, and alligators, including the rare white alligator, just to name a few. During the summer months, the zoo offers a chance to cool off in the Splash Park, known as the Cool Zoo.

Visitors can also stroll through a real swamp right in the middle of uptown New Orleans and see a houseboat on the lagoon full of 14-foot alligators facing a pair of playful black bears.

There are engaging educational programs, hands-on animal encounters and lush gardens to enjoy. The Audubon Zoo is a fun escape from the busy city, with daily presentations, chats and feeding times, all worth trying to catch during your visit.

So that sums up our top 10 things to do in New Orleans, we hope you enjoyed it.

Top 10 Things To Do In Gothenburg Sweden