Skip to content
Travelling
Las Vegas, located in southern Nevada near the Colorado River, is Nevada’s economic center and the largest city in the state. Discovered by Spanish explorers in 1829, the area that would become Las Vegas soon developed as a stopping point for settlers on their way to California.

Las Vegas’s historic core lies at a site once occupied by marshes, freshwater springs, and grassy meadows, that are now long since covered by streets, buildings, and parking lots. The modern-day city sprawls across a broad, arid valley at an elevation of roughly 2,000feet. This fascinating resort city is famed for its vibrant nightlife, exciting attractions, and 24-hour entertainment.

Getting up and down the Las Vegas Strip is easy, even in the heat, as the air-conditioned Las Vegas Monorail runs from the MGM Grand to SLS Las Vegas and has seven stations. There is so much to see and do in this thrilling, vibrant and entertaining city, both in and around the resorts on The Strip, and in the lively and rapidly revitalizing downtown, that it’s certainly well worth a visit.

10) At number 10 ride one of the worlds tallest observation wheels, the High Roller 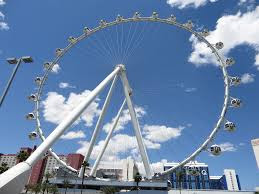 Like the city it sits in, the High Roller is always moving, even as you board and exit your pod, and even after the last ride of the day at 2 a.m.For 24 hours a day, it moves about one foot per second and the entire rotation takes 30minutes.

Bigger than both the London Eye and the Singapore Flyer, the High Roller gets you way up above the crowd of Vegas, and with an upgrade to a Happy Half Hour ticket, you can enjoy a cabin with an open bar and bartender.

During the half, an hour revolution in one of the High Rollers 28 air-conditioned compartments you can watch the landscape glimmer with the hot sun or neon lights as you soar high above and get amazing panoramic views of the City.

9) At number 9 is the Shark Reef Aquarium

One of the largest exhibits of its kind, The Shark Reef at Mandalay Bay houses many species of aquatic life including sharks, exotic fish and more. Located at the Mandalay Bay hotel near the intersection of the Vegas Strip and HaciendaAvenue, the Shark Reef Aquarium is a bit different from a normal aquarium as the name may suggest.

The aquarium is designed so that visitors enter an ancient underwater temple that is slowly being swallowed up by the ocean. The animals on show are some of the most dangerous and unusual in the world and most come from tropical waters. There are fourteen fantastic exhibits with the star of the show being a shipwreck that contains 1.3 million gallons of water.

You can enjoy almost 360-degree views of sharks and other fish. In total there are over 2,000 animals making up 100 different species and 15 types of shark in an Aquarium that’s enhanced by cutting-edge special effects and interactive hands-on elements.

8) Number 8 is The Neon Museum

Once the sun goes down, Las Vegas shines brightly with hundreds of thousands of colorful bulbs flashing for your attention. Neon is nothing new in America’s Playground with hotels, bars, and casinos that have been luring clients with bright signs for decades.

Located on Las Vegas Boulevard just north of the Mob Museum, the Neon Museum pays tribute to the Las Vegas light show, offering guided tours of what’s known as the boneyard. The nearly 2-acre outdoor exhibit is home to more than 200 pieces of old Vegas signage all laid out for admiration on the desert floor.

The one-hour boneyard walkthrough is led by local historians, who provide details on signs from such iconic landmarks as Caesars Palace, the Golden Nugget and Stardust. The boneyard can be found behind the museum’s visitor’s center, which occupies the lobby of the former La Concha Motel.

Recent visitors to the museum highly recommended the night tours, when you can see a few signs that have been restored to their former glory.

Once you pass the famous Welcome to Fabulous Las Vegas sign along Las Vegas BoulevardSouth, it won’t be too long until you’re cruising the Strip. Here you’ll find Las Vegas’ most iconic landmarks, including the Bellagio Fountains, the EiffelTower at Paris, the pyramid and the sphinx belonging to The Luxor, and The VenetiansGrand Canal.

The Strip, known for its concentration of resort hotels and casinos, all hosting their own dazzling shows, is approximately 4.2 miles in length and located immediately south of the Las Vegas City limits.

If you have the stamina, you can explore the Strip on foot, but alternatively, the Deucebus offers rides 24/7 from the Fremont Street Experience in downtown Vegas all the way to the southern end of Las Vegas Boulevard.

The Monorail is another option, which travels from the MGM Grand and Sahara Avenue. Travelers say its also good to visit the Strip at night to see all the attractions light up in the desert. You can wander the Strip any time of day or night, but note that individual businesses feature their own operating hours.

6) At number 6 are the Fountains of Bellagio

Located outside the Bellagio hotel at the intersection of Flamingo Road and the VegasStrip.Every 15 to 30 minutes, those walking past the Bellagio are treated to a complimentary light and water show with the fountain’s jets shooting water into the air during intricately choreographed dances.

The dancing streams of water are illuminated from within and jut out sporadically to the pulse of whichever song is playing. With a combination of music, water, and light, the Bellagio delivers a spectacular audio-visual performance with its majestic fountains. It is a most ambitious, complex water feature and it’s absolutely free for any visitor to enjoy.

Youll also find a fine art gallery, as well as botanical gardens within the Bellagio not to, mention a luxury hotel, several restaurants, a spa, and numerous nightlife venues.

Spanning the Colorado River and the Black Canyon, which separates Nevada and Arizona, about 30 miles south-east of Las Vegas, sits the Hoover Dam. The immense concrete structure confines Lake Mead one of the largest reservoirs in theUnited States by volume.

The Hoover Dams art-deco design is impressive inside and out, although the exterior’s breathtaking enormity is truly something to behold. This incredible dam is 726 feet high, 650 feet thick at the bottom and has been responsible for powering up Nevada, California and Arizona for nearly 80 years.

Named one of the Top 10 Construction Achievements of the 20th Century, the Hoover Dam, named after Americas 31st president Herbert Hoover, continues to draw crowds 80 years after its creation.

Attracting more than a million visitors a year, the Hoover Dam is located in Black Canyon,just minutes outside of Las Vegas. With a number of tour options available, the Hoover Dam is both educational and entertaining,making it the perfect excursion.

At this top Vegas attraction, you’ll journey through multi-sensory exhibits and experience real-life stories of those involved with the Mob over the years.The Mob Museum in Las Vegas is officially known as The National Museum of OrganisedCrime and Law Enforcement and is located inside a restored 1933 former courthouse and post office building, just minutes from Fremont Street in downtown Las Vegas.

It provides the visitor with an interactive journey through the history of the Mob and starts right at the beginning and goes up until modern day.You will find true-life stories that come to life through interactive exhibits and tell the stories from both sides.There are sections of the museum dedicated to Al Capone, Lucky Luciano and J. Edgar Hoover.

Visitors can see hundreds of artefacts like guns, electric chairs, and even Bugsys sunglasses, and hear the wiretap recordings that brought down Kansas City crime bosses in the 1950s.After chronicling the history of organized crime, the Mob Museum looks to the present day to study the current face of criminal rackets around the world.

A giant 5-meter touch-screen brings a world of drug trafficking, weapons dealing, money laundering and cyber-crime to life, showing how law enforcement agencies adapt to a changing landscape.Get a different view of American history at the Mob Museum and get a real, eye-opening, scene of organized crime and its impact on the world.

3) At number 3 is the Mirage Volcano

One of Las Vegas’ most renowned icons, the Volcano at the Mirage is a sight to see andan experience that should be one of your top things to do in Las Vegas. Two or three times a day, the Mirages volcano rumbles into life, shooting fireballs morethan 12 feet into the air, spewing flames and doing a nice, friendly impersonation of a real volcano.

The entire lagoon area in front of the Mirage comes to life when the volcano is erupting. The volcano had a makeover in 2008, adding more fire and drama, and an exclusive soundtrack for the eruptions, making it great fun to see and hear.

Crowds gather early to get a glimpse of this iconic curbside attraction, which is free to watch. The volcano show lasts approximately 5 minutes and ends with a giant fire eruption 60 feet into the air. The first show is at 7pm and the volcano can be viewed from the sidewalk on the Vegas strip in front of the Mirage Hotel or from inside the hotel premises.

The Venetian sits across the street from The Mirage in the center of the Strip. Vegas has its own replicas of the Eiffel Tower, the Luxor pyramid, and the canals of Venice, and the Vegas versions can be just as fun as the originals.

At The Venetian, both indoor and outdoor gondola rides are available. Whichever you choose, your gondolier will serenade you as you float under bridges, beside cafes, under balconies, and through the vibrant Venetian streetscape as your singing gondolier sweeps you down the Grand Canal for a ride like no other.

Gondola rides are offered every day, and visitors can choose between a private two-person gondola or a shared gondola that seats four people. The 14-minute ride covers about half a mile of water, weaving indoors beneath the Venetianssky-painted ceilings or outdoors along the Strip.

1) At number 1 is the Stratosphere Tower

The tallest freestanding observation tower in the US offers the best views in Las Vegas, as well as a revolving restaurant and four exciting amusement rides! At 1,149 feet you get spectacular 360-degree views of the city with indoor, climate-controlled decks enclosed in floor to ceiling glass and outdoor observation decks equipped with viewfinders.

The four thrilling rides include The Big Shot, which at 1,081 feet is one of the highest thrill rides in the world.Insanity at 900 feet, dangles riders over the edge of the tower and then spins in a circular pattern at approximately 40 mph.

The X-Scream is at 866 ft and then SkyJump Las Vegas that is a controlled descent Bungeejumping ride that allows riders to plummet 855 ft attached to a high-speed descent wire. Located at the Stratosphere hotel-casino, just north of the intersection of the VegasStrip and Sahara Avenue, it is a Las Vegas must-see attraction!

So that sums up our top 10 things to do in Las Vegas, we hope you enjoyed it.

Top 10 Things To Do In Pisa