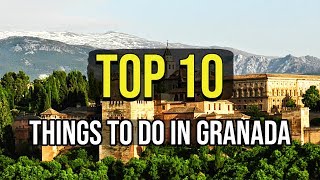 Granada is a city in southern Spain’s Andalusia region in the foothills of the Sierra Nevada mountains.

It is known for grand examples of medieval architecture dating to the Moorish times, especially the Alhambra, a sprawling hilltop fortress complex encompasses royal palaces.

Granada’s scenic landscape, Spanish charm, and historical sites make it one of the country’s most popular tourist destinations.

One of Granada’s star attractions and one of Andalusia’s most iconic sights, The Alhambra is a complex that was originally constructed as a small fortress in AD 889 on the remains of Roman fortifications.

The Moorish rulers then extensively rebuilt the fort and walls in the 1200s. This remarkable UNESCO World Heritage Site is one of the most visited monuments in Spain and is considered stunningly beautiful.

Train GranadaVisitors can see the best that Granada has to offer with specially designed train routes covering all the major sightseeing destinations in the city, home to stunning architecture, world-class museums and great attractions.

Choose from two train routes and hop-on and off at your leisure. Each train is equipped with audio guides giving helpful commentaries along the way.

Discover the many sights and highlights of Granada with the Hop-on Hop-off sightseeing train.

Just below the Alhambra, these enchanting gardens surround a pretty nineteenth-century villa.

They are one of the city’s most attractive green spaces, a lovely haven of flowerbeds, small ponds and leafy paths.

Laid out in the French and English style, with shady nooks, pools, and fountains, the shaded walkways provide a sanctuary from the powerful sun.

Beneath the Albayzín district is Carrera del Darro, a street that traces the course of the little river Darro as it flows through the city where the old walls would have been.

The street is nice for a scenic walk and can taper to just a couple of meters-wide in places. All the while you’ll have splendid views of the river and the lush vegetation on its banks.

6) At number 6 is Sacromonte Caves Museum

This fascinating museum is located in a set of caves where visitors can explore the diverse geography of the region with mountain views, meadows, rivers, and ethnic variety.

Here, in what is now the museum of Sacromonte, you can explore ten recreated caves and learn about the cave-dwelling lifestyle of the past.

See how traditional handicrafts were made, as inhabitants ventured into basketwork, ceramics, and weaving. You’ll also get sensational views of Alhambra from the site.

The most well-known part of the Alhambra, the Nasrid Palaces was the official residence of the Moorish kings of Granada.

The different sultans who occupied the Alhambra during Granada’s Moorish period continued adding various royal houses onto the palaces.

Once inside, the palaces are truly a sight to behold and the amazing detail in the carving and beautifully laid colorful tiles are stunning.

Located in the heart of Granada’s historical Albaycín, close to the famous Mirador deSan Nicolás, Jardines de Zoraya is easy to find.

This intimate space offers a relaxing atmosphere with bubbling fountains and swaying palm trees, which act as a perfect counterpoint to the frenzied rhythms and passionate footwork of the performers.

Experience a magical flamenco show in the heart of historical Albaycín, it is definitely a must-see when visiting Granada!

3) Number 3 is The Cathedral and the Royal Chapel

Built on top of Granada’s mosque at the start of the 16th century this magnificent building is Spain’s second-largest cathedral.

It was erected during a transition in fashion, so the foundations are gothic even if the main structure and interior are from the renaissance. The Cathedral has impressive facades and a stunning interior with a grand altar and several beautiful chapels.

To soak up the brilliance of this cathedral stands in the main chapel and lift your gaze to the stained glass windows, sculptures and paintings on the sides.

2) At number 2 is the Science Park

Located just a 15-minute walk south of the center, The Science Park is an interactive science center and museum with more than 70,000 square meters dedicated to enjoying cultural leisure, smart fun, and educational entertainment.

The museum, under the motto “A new kind of Museum” opened in 1995 and was designed not only for looking but also for touching.

1) And at number 1 is the Museum Of Fine Arts

Located in the Palace of Charles V, the Museum of Fine Arts is Granada’s leading art museum for classic works and houses over 2,000 pieces, including a number of important religious paintings and sculptures dating from the 16th century onwards.

The museum also has a number of works by local artist Alonzo Cano along with many other splendid artistic pieces.

So that sums up our top 10 things to do in Granada, we hope you enjoyed it.

Top 10 Things To Do In Toledo

Top 10 Things To Do In Verona