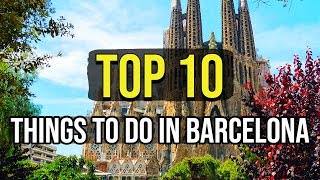 Barcelona, the cosmopolitan capital of Spain’s Catalonia region, is a major port and commercial center that is famed for its individuality, magnificent Gaudí creations, cultural interest, and stunning scenery.

The Barri Gotic is the center of old Barcelona and some of the buildings here go back to the Roman era. Medieval architecture is also quite common and the attraction of these buildings brings in thousands of tourists to Barcelona every week.

The city is well known for hosting the 1992 Summer Olympics as well as world-class conferences and many international sporting tournaments making this cosmopolitan and bustling city is popular with tourists all year round.

With its fantastic art and architecture, and a rich medieval history, as well as innovative modern additions, Barcelona is certainly not short of things to see and do. With sandy Mediterranean beaches, fantastic attractions and mouth-watering food, Barcelona is sure to mesmerize you.

La Sagrada Família is a large Roman Catholic Church and one of Gaudí’s most famous works in Barcelona. This giant Basilica has been under construction since 1882 and when it is finally finished in 2026, the Sagrada Familia will have taken 144 years to complete.

Gaudí’s work was influenced by his passions in life, architecture, nature, and religion. He considered every detail of his creations and integrated these into his architecture, using such crafts as ceramics, stained glass, and wrought ironwork. He also introduced new techniques in the treatment of materials used for his work.

Gaudi committed the last 15 years of his life to this project and is buried in the crypt of the building. As one of the most visited monuments in Spain, visitors should allow plenty of time to admire the amazing exterior of the building that is stunning.

The interior is also strongly marked by Gaudís personal style and inspired by nature, with columns shaped like tree trunks, giving the feeling of being in a forest. This UNESCO World Heritage Site is truly an unfinished masterpiece that is a must-see in Barcelona.

Barcelona aquarium is one of the largest Mediterranean-themed aquariums in the world and Europes most important recreational and educational marine center.The aquarium is located in Port Vell, a harbor in Barcelona and the 35 aquariums at the facility are home to 11,000 animals representing 450 species from different marine systems.

From the coral communities to the shallow sandy coastal habitats, as well as Spain’s coastline, you can be sure to discover some amazing sea life. Behind the aquariums are a large team of highly qualified professionals using the latest technology to look after the wellbeing and health of all the sea creatures.

Temperature, salinity, water quality, lighting and the re-creation of each ecosystem are painstakingly analyzed to ensure that all aquarium inhabitants, some that are especially difficult to keep in captivity, can be accommodated and enjoyed.

Visitors can embark on an aquatic journey through the tropical oceans and marine communities of the Mediterranean. The unique Oceanarium features a transparent tunnel that’s more than 80 meters long, so you can walk among sharks, eels, and stingrays. A trip to Barcelona Aquarium is fun, fascinating and informative, and a great day out for all the family.

8) At number 8 is the Montjuïc Cable Car

The Telefèric station is a short 10-minute walk from the Olympic Stadium and a 5-minute walk from the Miró Museum, both worthy of a visit in their own right. With brand new cabins that can seat up to eight people, this is the ideal way to ride in comfort and enjoy exhilarating panoramic views of Barcelona on the way up.

Casa Batlló is located at number 43 on Paseo de Gracia, a street that in the past connected the city to Villa de Gracia, which today is a fully integrated district of the city. The building was constructed in 1877 and in 1903 Mr. Josep Batlló, a textile industrialist and prominent businessman, purchased it.

Mr. Batlló granted full creative freedom to Antoni Gaudí, putting him in charge of a project that initially entailed demolishing the building. However, the demolition of the house was ruled out, and it was fully reformed between 1904and 1906.

The architect completely changed the façade, redistributing the internal partitioning, expanding the patio and converting the inside into a true work of art. Besides its artistic value, the building is also extremely functional, much more characteristic of modern times than of the past.

Casa Batlló is one of the most interesting residential buildings in Europe and was Gaudíat his imaginative best. The facade, sprinkled with blue, mauve and green tiles and studded with wave-shaped window frames and balconies, rises to an uneven blue-tiled roof with a solitary tower.

Visitors can learn all about Gaudí’s creative world, the house’s construction, and life in the early 20th century.

The most iconic street in Barcelona, La Rambla is a large, tree-shaded, pedestrian boulevard that runs from the Plaça Catalunya, where the beautiful Romanesque 12th-century Convent of Santa Anna stands, all the way down to the seafront.

Located in the Gothic Quarter of Barcelona, it originally marked the edge of the town center during the Middle Ages, before later becoming a popular street full of historic buildings, outdoor cafés, shops, and the famous La Boquería food market.

The unique feature of the Rambla or street is that it is divided into 5 different streets flowing smoothly into each other. At 2 kilometers long, the boulevard is busy throughout the day and night and is a famous meeting point for tourists.

5) Number 5 is the Camp Nou Experience

In the western Les Corts neighborhood of Barcelona, is the 99,000 seat stadium, that has been the home ground of FC Barcelona since 1957. It’s one of Europe’s football cathedrals and is the 3rd largest in the world.

The Camp Nou Experience is one of the most popular tourist attractions in Barcelona and taking a tour of the stadium and browsing the memorabilia of one of the world’s most prestigious teams is magnificent.

Perched up in the rafters, the commentators’ boxes offer the best view of the entire stadium and the playing field. Many famous TV and radio personalities have spent hours here, helping fans at home feel the hype and the ambiance of the game from afar.

Visitors can walk around the interactive museum and learn about the team via touch screens and sound installations. Then live the emotion of entering the field of play from the tunnel, enjoy photos, goal videos and a trophy cabinet full to the brim.

Visitors can explore this UNESCO World Heritage Site which is another brilliant work from the fantastical mind of architect Antoni Gaudí. The residential building is located in the district Eixample and is one of the most famous architectural landmarks becoming a must-see visitor attraction.

The Casa Mila is also known as The Quarry, which is a reference to its unconventional rough-hewn appearance. The architect created an astonishing modernista style building, set out around two interior courtyards that provide the flats with ventilation and light. It was the last private residence designed by architect Antoni Gaudí and was built between1906 and 1912.

The Casa Milà features the reproduction of an early 20th-century apartment, an exhibition of Gaudís work in the attic, a really interesting museum and the grand roof terrace, with its famous chimney pots that look like surreal chess pieces.

Located inside the Park de la Ciutadella, Barcelona Zoo is one of the city’s most popular attractions and sees thousands of animal lovers’ visits each year. One of the world’s largest city zoos, Barcelona Zoo has 32 acres of space for over 2,000 animals from over 300 species.

The zoo was for a long time famous for its star resident, ‘Snowflake’, who was the only known albino gorilla in captivity. He resided in the zoo from 1966 until he passed away in 2003.

Visitors can learn all about the animal’s lives and natural habitats, and discover the zoo’s ongoing conservation and breeding programs. You can see the world’s largest lizards in the Komodo dragon enclosure, admire flocks of parrots and tropical birds in the aviary, or see pigs, ponies, and even rare Catalandonkeys in the child-friendly farmyard.

A visit to Barcelona Zoo is a fantastic day out with everything you need to enjoy with the family, including restaurants, bars, pony rides, a miniature railway, electric cars, shops, and picnic areas.

2) At number 2 are the Beaches

Barcelona’s coastline stretches for 4 and a half kilometers and offers visitors a wide variety of excellent beaches. Voted one of the best beach cities in the world by the National Geographic just a few years ago, Barcelona didn’t actually have any beaches until the early 90s.

Ahead of the 1992 Olympics, the town council set about the creation of an artificial beach from the tip of the Barceloneta to Poblenou.Barcelona now boasts a number of beautiful beach locations to suit everyone, from those looking to simply relax, to those looking for some extreme sports. Located on the coast of the popular neighborhood, which shares its name, La Barceloneta beach is Barcelona’s most bustling stretch of sand and sea.

This inevitably makes it one of the most crowded beaches in Barcelona, but it compensates for this with its surplus of entertainment and seafood eateries and is perfect if you still want to be close to the city’s main attractions.

With 400km of sandy beaches and sea, Nova Icaria beach is considered the most peaceful in Barcelona, and thus a perfect choice for families or those looking to relax. Sant Sebastia beach is the closest to the eastern end of Barcelona and stretches for over a kilometer, making it one of the longest beaches.

With fantastic sporting facilities, visitors can play volleyball or take part in extreme sports. Its popularity also means there is a wide range of dining facilities, making it a perfect place to spend the whole day.

North of Gràcia, this colorful park perched high on the hills is where architect AntoniGaudí turned his hand to landscape gardening and it was originally intended to be a visionary housing complex. The world-famous Catalan architect and his main patron, Eusebi Güell, conceived the idea of a modern estate, however, they received no interest from investors and eventually had to abandon the project.

Gaudí moved into the model home, which is today the Gaudí House Museum and remained there until he died. This amazing, flamboyant and enchanting place is where his passion for natural forms really took flight and visitors can see exuberant buildings, colorful tile work, and the amazing snaking Serpent Bench.

The park is extremely popular, and access to the central area is limited to a certain number of people every half-hour, so visitors are advised to book ahead.

Top 10 Things To Do In Verona