Skip to content
Travelling
Bali is one of the most popular travel destinations in the world, and with good reason, as this island which is known as the ‘Island of the Gods’ is one of the most beautiful places on earth. Surrounded by azure seas and edged with golden beaches, Bali is a gorgeous island located in the middle of Indonesia.

As well as sea and sand, Bali has a huge number of other attractions to enjoy such as temples, caves, waterfalls, museums, and markets, and if you like history and culture then you can spend hours learning about the local legends and Balinese traditions. The island is home to many religious sites such as the cliffside Uluwatu Temple, one of six key temples believed to be Balis spiritual pillars.

To the south, the beachside city of Kuta has lively bars, while Seminyak, Sanur, and NusaDua are popular resort towns. This tropical hideaway manages to be an adventure seeker’s paradise, a spiritual sanctuary, a family-friendly getaway, a food lover’s heaven and a surfer’s oasis all at once.

The locals’ warm and welcoming ways and connection to their rich cultural and religious heritage are complemented by landscapes that include rocky coastal cliffs, coral reefs within an aquamarine ocean, steep volcanic mountains and emerald-green paddy fields, making this stunning location a perfect destination.
…………. 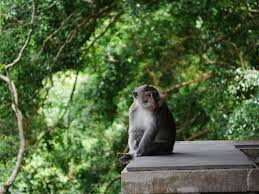 .
On the fringes of the Ubud main center, the Ubud Monkey Forest, also known as the SacredMonkey Forest of Padangtegal, is one of Ubud’s most popular attractions. The Ubud Monkey Forest is a place of scientific research as well as a site of spiritual and cultural aspects, with temples sanctified by the local villagers deep within its grounds.

This natural forest sanctuary is home to a horde of grey long-tailed macaques with the site well-preserved thanks to a community-based management program. The forest is also conveniently positioned near Ubud Town Centre and within easy walking distance from guesthouses and resorts along the main roads.

The complex is full of over 700 monkeys and you can buy bananas to feed the primates from the main entrance but beware if you have anything else on you like sunglasses or water bottles the monkeys have been known to grab what they can from visitors. Besides watching playful monkeys in their natural habitat, swinging through canopies, lazing along pathways or feeding on bananas, the site offers interesting walks along paved pathways through a leafy nutmeg forest.

Beautiful ancient temples with guardian statues covered in moss also feature throughout the forest. The entire area is a nature reserve and you can walk around and take in the scenery as well as take photographs of the monkeys at this must-see attraction.

9) Number 9 is the Tegenungan Waterfall

Tegenungan is a popular waterfall conveniently located in the lush forest halfway between Ubud and Bali’s provincial capital of Denpasar. Getting to the falls is a pleasant drive down paved village roads lined with stretches of green rice fields on both sides and then a 15-minute trek through the forest will reveal a huge waterfall, complete with a thudding cascade that drops around 15 meters.

It’s a very powerful fall, so there is no wading underneath it but instead, view from the rocky surrounds. It’s also worth noting that the walk down to it is quite steep, and it gets quite busy in the heat of the day, so consider heading to it earlier in the morning if you’re after a more serene experience.

Dense foliage frames the falls, and the water volume is impressive at almost any time of year, but normally at its strongest during the wet season that is October to April. You can go down to the vast pebbly base and enjoy a dip in the plunge pool, but this is not advised after heavy downpours, due to the risk of flash floods.

8) At number 8 is Tegalalang Rice Terraces

Tegallalang Rice Terraces in Ubud is famous for its beautiful scenes of rice paddies involving the subak which is a traditional Balinese co-operative irrigation system, that according to history, was passed down by a revered holy man in the eighth century. During the daytime, Tegalalang is an incredibly popular attraction in Bali.

The picturesque scenery of delicate rice terraces surrounded by lush palm trees and tropical greenery makes Tegalalang a visually appealing sight to behold. But exotic beauty is only part of this attraction’s charms.

Ubud’s rice terraces are purposefully built to facilitate the effective use of water resources and organise local social units. If you make your way up to the top, you’ll get a magnificent view of the rice terraces sloping across the valley, peppered with coconut trees, with the water in the irrigation fields glistening in the sunlight.

Tourists can also explore the villages nearby to hear fascinating local stories and observe the custom and lifestyle of the people who built and maintain the glorious rice terraces.

Bali’s beaches are a quintessential part of what makes this island such a breathtaking destination. Bali has a rich assortment of beaches, each of which is a favorite destination on its own.

The beaches on the island’s south have palm-fringed white sand such as Kuta, and NusaDua that was once a swampy mangrove and now has been transformed into a 14 km stretch of gorgeous light sand.

There are the cliff-guarded ‘hidden’ shores of the many Uluwatu beaches and Padang Padang, a relatively small beach, more of a sheltered cove of white sand protected by rocks.

Bali’s beaches also comprise striking black sands on the north and western shorelines, with sleepy undisturbed coves in between. Once the haunt of surfers, Balis beaches now welcome visitors in search of paradise with superb hotels and excellent facilities

6) At number 6 is Tanah Lot Temple

Tanah Lot Temple is one of Bali’s most important landmarks combining the cultural, natural and historical elements of Bali in one spot. Famed for its unique offshore setting and sunset backdrops, this ancient Hindu shrine is perched on top of an outcrop amidst constantly crashing waves.

The temple is located in the Beraban village of the Tabanan regency, an approximate 20kmnorth-west of Kuta. After centuries of large waves persistently crashing at its rock base, Tanah Lot faced the constant threat of erosion, reaching a significant decline in 1980. The authorities carried out preservation efforts and a third of the present Tanah Lot is actually artificial rock.

At high tide, waves flood the causeways making it impossible to cross. At low tide, you may cross to view the rock base where the legendary ‘guardian’ sea snakes dwell in crevices around the fountain.

This natural spout is the source of holy water for all the temples in the area. Convenient pathways and well-kept tropical gardens line the grounds from Tanah Lot to Batu Bolong, with resting spots offering shade and good viewpoints to both outcrops. Tanah Lot Temple is simply among Bali’s not to be missed sights.

Bali Safari and Marine Park offers a fun day out at Bali’s largest animal theme park. The park opened its gates in 2007 and is home to over 80 species, all roaming freely within their enclosures built to closely mimic their natural habitats.

Guests board safari buses to travel through different areas of the park with a personal guide, providing the opportunity to see the wildlife collection living naturally all together in the open range areas. There are around 400 specimens from three regions, Indonesia, India, and Africa, which include spotted deer, Himalayan bears, African hippos, zebras, camels, ostriches, baboons, and lions.

Key exhibits in the Park include Ranthambore, a replica of an ancient Indian fort where majestic white tigers roam, Elephant Village, a sanctuary for retired working elephants and the showcase of the komodo dragons. There are also fun close-up photo opportunities with some of the animals and various live animal shows as well as the new Bali Theatre onsite.

Every day in Balis predawn darkness, hundreds of visitors begin the trek up to the 1,700-meter summit of Mount Batur to watch the sunrise above the lush mosaic of mist-shrouded mountains. The still-active Mount Batur volcano has erupted about 24 times since 1800, each time reshaping the surrounding landscape.

This sacred volcano lies in Kintamani District in Balis central highlands, about an hour’s drive from Ubud and the hike to the summit to watch the sunrise has long graced the list of top things to do in Bali. The hike along the well-marked trails is relatively easy and usually takes about two to three hours.

Guided treks typically include a picnic breakfast, with eggs cooked by the steam from the active volcano. On a clear day, the views are spectacular, stretching all the way across the surrounding mountain range and beautiful Lake Batur, the island’s main source of irrigation water.

Goa Gajah ‘Elephant Cave’ is an archaeological site of significant historical value that makes it a special place to visit. Located on the western edge of Bedulu Village, six kilometers out of central Ubud, the GoaGajah dates back to the 11th century and was built as a spiritual place for meditation.

The main grounds are down a flight of steps from the roadside and parking area, which is lined with various art and souvenir shops and refreshment kiosks. Upon reaching the base you will come across a large meeting hall and an assortment of old stone carvings, some restored to their former full glory.

The pool, excavated in 1954, features five statues depicting Hindu angels holding vases that act as waterspouts. Various structures reveal Hindu influences dating back to the 10th century, and some relics feature elements of Buddhism dating even earlier to the 8th century.

Sprawling over 20 acres of tropical forest and gardens, in the village of Singapadu, Bali Zoo is home to an amazing mix of animals, including Indonesian originals such as Sumatran elephants and Borneo orang-utans. The zoo is made up of open-air enclosures rather than cages which are meant to mimic the natural habitat of the species here.

Visitors can either visit in the day time or choose the night safari which is perfect if you want to see some of the nocturnal animals that call the zoo home. The Zoo is also home to various tropical plants and an extensive collection of fauna.

The zoo is shady and pleasant to walk through and also features a range of experiences, such as elephant and pony rides, photo sessions with animals, as well as outbound adventures. Bali zoo is where families can participate in fascinating animal adventure activities, some of which are unique experiences in Indonesia.

1) And at number 1 is Uluwatu Temple

Uluwatu Temple is arguably one of the most famous sights in Bali and one of the six key temples believed to be Balis spiritual pillars. It is renowned for its magnificent location, perched on top of a steep cliff approximately70 meters above the waves of the Indian Ocean.

Pura Luhur Uluwatu is definitely one of the top places on the island to go to for sunset delights and daily Kecak dance performances. Balinese architecture, traditionally-designed gateways, and ancient sculptures add to UluwatuTemple’s appeal.

Several archaeological remains found here prove the temple dates back to around the10th century. There are two entrances to Uluwatu Temple, from the south and the north and the temple is also known for its monkey population that is believed to guard the temple from bad influences. Visitors can also catch a range of shows here such as the famous Balinese dances.

So that sums up our top 10 things to do in Bali, we hope you enjoyed it.