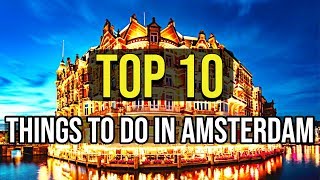 Amsterdam is located in the Western Netherlands, in the province of North Holland and is the capital city of The Netherlands. Both Amsterdam and The Hague play important roles in the governing of the Netherlands, with The Hague being the location of much of the Dutch government, while Amsterdam is the economic and cultural heart of the country.

Known for its artistic heritage, elaborate canal system and narrow houses with gabled facades that are legacies of the city’s 17th-century Golden Age, Amsterdam is one of the greatest small cities in the world.

Its Museum District houses the famous Van Gogh Museum, the Rijksmuseum, and modern art at the Stedelijk. With its extensive canal system, it has little road traffic and in Amsterdam, your destination is never far away.

Cycling is key to the city’s character, and there are numerous bike paths. Renting a bike or taking a guided cycle tour is a great way to discover the city and can be quite an adventure. With its picturesque canal network, rich history and vibrant cultural scene, the capital of the Netherlands is one of the world’s most unique city destinations.

Top 10 Things To Do In Amsterdam

The Van Gogh Museum is one of the most popular museums in the world, attracting visitors from every corner of the globe. This fascinating museum is dedicated to the works of Vincent van Gogh and his contemporaries and holds the world’s largest collection of Van Gogh’s paintings and drawings, including the famous Sunflowers and Almond Blossom.

The post-impressionist painter was one of the most influential figures in the history of Western art, and his use of bold colors and broad, expressive brushstrokes remain as captivating today as they were in the nineteenth century.

Having originally opened on Museumplein in 1973, the Van Gogh Museum has been expanded and modernized over the years, ensuring its a truly cutting-edge exhibition and visitor space.

The museum is also home to exceptional research facilities that add depth to our knowledge about Van Gogh’s life and gives visitors an insider look at the conservation work that goes on. There are art workshops for kids, and on Fridays the museum stays open later, inviting musicians and other performers to share its public spaces with the artworks and visitors.

9) Number 9 is the ARTIS Royal Zoo

Artis Zoo, Hollands oldest zoo, was founded in 1838 and is located right in the center of Amsterdam. It’s a place where nature and cultural heritage come together, being one of the fewest zoos in Europe to have so many listed buildings within its grounds. It is a great place for a family day out, and during the summer the zoo opens late on Saturdays for music, special tours, and performances.

Visitors can see over 700 species of animals including lions, zebras, jaguars and giraffes, and 250 varieties of trees including Amsterdam’s oldest monumental tree, the Heimans Oak dating from 1750. Facilities at the zoo are excellent and signage at the animal enclosures includes English translations.

Artis is also a brilliant place for kids but can get busy during the Dutch school holidays. There is a small petting zoo and comprehensive facilities are provided including children’s playgrounds, a number of restaurants and cafes selling refreshments. There is also an impressive art collection, a zoological library, a planetarium, and 27 historical buildings to explore.

8) At number 8 is Zaanse Schans the Windmill Village

Dutch windmills are the icons of the Netherlands and the finest place to see the windmills is in Zaanse Schans that has one of the best-preserved collections of traditional windmills and houses in the country.

This picturesque Dutch village park at Zaanse Schans is approximately 15km north of the city and here you will find iconic views of the 6 windmills set on the river Zaan. From a distance, you can see the sails of the windmills slowly turning, with extensive meadows in the background.

Then looking around you will see nothing but history with the wooden facades, the slit windows, and the low doors. Packed with wooden windmills, barns, and houses dating back to the 18th and 19th Centuries and built in the typically Dutch wooden architectural style, the area is an actual working community.

Visitors can climb up to the deck of the mill via the narrow stairs, enjoy a beautiful panorama and see how the industry developed in the wider area. Rural Dutch life seemingly preserved right out of the days of long ago.

The Hortus Botanicus is located just east of Amsterdam center and is one of the oldest botanical gardens in the world. With its beautiful gardens and special greenhouses, it has a collection of over 4,000 plant species and is a lovely place to spend a couple of hours and connect with nature.

The garden was opened in 1638 originally as a medicinal herb garden to help combat plague type illnesses, which gripped Europe at the time. Its collection then expanded as Dutch traders brought back exotic plants from all over the world, particularly from South Africa and Asia.

Today some of the more unique plants on display include Victoria, the garden’s giant waterlily. When in bloom, the 154-year-old lily opens its flower every night around dusk. The large hothouse creates conditions for three different tropical climates and hundreds of butterflies can be found inside the Botanicus’ Butterfly Greenhouse.

The Garden has a lovely café for visitors that is located in the recently renovatedOrangery, with a large outside terrace that opens onto the garden. Guests can also visit the interesting museum shop selling bulbs, flowers, and seeds as well as books about plants.

6) At number 6 is the Royal Palace Amsterdam

The Royal Palace of Amsterdam is situated on Dam Square in the center of the city and was originally built as the city hall. Designed along classical lines, the Palace was built between 1648 and 1655 and is one of three palaces still in use by the Dutch royal family. To counter Amsterdam’s sand, the building stands on thousands of wooden piles to give it the required support.

Today the Royal Palace Amsterdam hosts state visits, award ceremonies, and other royal events. However, when the royal family is not using the palace it is open to the public and visitors can explore the magnificent interior and discover the rich history of the building.

This beautiful 17th century Palace is well worth a visit and guests can discover paintings and sculptures by the most famous artists of the Dutch Golden Age along with finely preserved imperial furniture, chandeliers, and stunning murals.

Dam Square is Amsterdam’s best-known square and it is a good location from which to explore the medieval city center.It lies in the historical center of Amsterdam, approximately 750 meters south of the main transportation hub Central Station.

Dam Square was created in the thirteenth century when a dam was built around the river Amstel to prevent flooding in the city. It is roughly rectangular in shape, stretching about 200 meters from west to east and about100 meters from north to south and it links the streets Damrak and Rokin.In addition to several restaurants, cafés, and shops, there are many excellent attractions to visit in Dam Square.

On the west end of the square is the neoclassical Royal Palace, and beside it are the 15th-century gothic New Church and the Madame Tussauds Wax Museum. The National Monument, a white stone pillar erected in 1956 to memorialize the victims of World War II, dominates the opposite side of this popular square.

Located on top of the A’dam Tower in Amsterdam North, the A’dam Lookout is an observation deck with an unrivaled panoramic views of Amsterdam. Opened in May 2016, the almost 100-meter high building has become a landmark in the city.

The panoramic deck provides a spectacular 360-degree view of the area. There is both an indoor and outdoor deck, found on the 20th and 21st floors and visitors can see the city’s historical center, its pulsating port, the unique Dutch landscape and the famous canals that belong to the UNESCO world heritage list.

Then buckle up and experience a once in a lifetime adrenaline rush on the Over TheEdge sky swing at 100 meters above the ground, you’ll get a literal birds-eye view of Amsterdam. Complementing the experience is a state of the art interactive exhibition about Amsterdam’shistory and culture.

3) Number 3 is the Rijksmuseum

The Rijksmuseum is situated on the Museumplein in Amsterdam and is easily accessible by public transport, car, and bicycle. It opened in 1800 in The Hague but moved in 1808 to Amsterdam where it was formally established.

Its first location was at the Royal Palace but it was later moved. The Rijksmuseum’s current location opened in 1885, and today it houses more than one million objects dating from 1200 to 2000.

Known as one of the world’s finest art museums, it is packed with works by local heroes Rembrandt, Vermeer, and Van Gogh as well as 7500 other masterpieces. Its collection spans over 800 years of art history in a magnificent Gothic and Renaissance building.

There’s also a library and world-class restaurant on-site and to experience a few hours of culture it doesn’t get much better than this. The Rijksmuseum is one of the most popular museums in the Netherlands and ranks high amongst the most visited museums in the world.

2) At number 2 is the National Maritime Museum

The National Maritime Museum is located in the Eastern Docklands area of Amsterdam. Built-in 1656, the former national naval warehouse was once used by the Dutch navy to store sails, ropes, weapons, and ammunition but since 1973 it has been home to the National maritime museum.

During the recent renovation, the building’s large inner courtyard has been covered by a glass roof, creating a pleasant space for visitors. In the evening hundreds of tiny lights placed between the shields of glass give an impression of a beautiful starry sky.

Visitors can experience years of maritime history with stimulating interactive exhibitions. Board the replica of the three-mast “Amsterdam”, a large vessel, which sank in a storm in the English Channel in 1749. The wreck of the ship was discovered off the English coast and the museum’s replica was completed in 1990.

The collection of The National Maritime Museum is one of the largest and most prominent maritime collections in the world with approximately 400,000 objects, including paintings, ship models, navigation instruments, and world maps.

The Museum offers a complete day out for families and there are various interactive and educational exhibitions for children of all ages. Dive into the excitement, courage, and adventure of sailors over the last 500 years at the National Maritime Museum.

1) And at number 1 is the Canal Cruise Amsterdam

Canal Cruise Amsterdam is one of Amsterdam’s must-do activities and the best way to explore the city. The history of Amsterdam is intimately connected with water. Its 165 canals were created over the centuries to stimulate trade and transport and reclaim land to expand the city.

They continue to define the city’s landscape and in 2010 Amsterdams canal ring was recognized as a UNESCO world heritage site. The tour boats take in much of the monumental architecture that lines the Canal Belt and visitors can float past the Hermitage Museum, West Church, the colorful flower market and more with an informative audio guide.

A canal tour can be both fascinating and relaxing by day, and enchanting and romantic at night when many of the houses and bridges are illuminated. Most canal cruises take around an hour, in which you’ll explore the Amsterdams canal ringand discover plenty of interesting facts about the city along the way.

As well as the excellent one-hour tour options, other types of canal cruises are available including the practical hop-on-hop-off services, romantic candle-lit tours, child-friendly adventures and intimate guided boat tours for smaller groups.

So that sums up our top 10 things to do in Amsterdam, we hope you enjoyed it.

Top 10 Things To Do In Stockholm