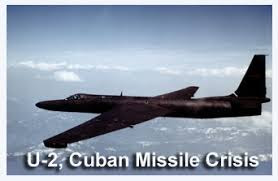 The Cuban Missile Crisis (1962) was the moment during the Cold War when the two superpowers The United States and the Soviet Union came close to Nuclear War.

Secret communications and miscommunications which played out between the white house and the Kremlin made the crisis a unique event.

After the failed Bay of Pigs Invasion in 1961 by the Kennedy Administration, Soviet Premier Nikita Khrushchev reached a secret agreement with Cuban Premier Fidel Castro to place Soviet nuclear missiles in Cuba to deter any further US aggression.

For some time the Soviets had been sending surface-to-air anti-aircraft missiles to Cuba, but President John F Kennedy did not protest.

However, he warned that if offensive weapons were sent to Cuba that the greatest issues would arise. On October 14th, 1962, US U-2 spy planes took several photos showing sites from medium-range and Intermediate-Range Ballistic Nuclear Missiles under construction in Cuba.

Nikita Khrushchev, who had promised not to send offensive weapons to Cuba had been lying.

To help him deal with the crisis Kennedy assemble the team called The Executive Committee of the National Security Council or XCOM for short.

At first, they favored bombing Cuba with the debate over the scale of the attack.

The President decided upon a middle course and on October 22nd ordered a naval quarantine of Cuba.

The term quarantine being used instead of the blockade as blockade assumed the state of war existed.

He also went on national television to inform the public of the crisis in which he said; “It shall be the policy of the nation to regard any nuclear missile launched from Cuba against any nation in the western hemisphere as an attack by the Soviet Union on the United States requiring a full retaliatory response upon the Soviet Union.”

On October 24th, Khrushchev responded to Kennedy describing the U.S blockade as an act of aggression, and the Soviet ships sent to Cuba would be ordered to keep going.

Some Soviet ships turned back and others proceeded. They were stopped by the U.S Naval Forces. But were discovered to contain no offensive weapons.

With no clear solution to the crisis, the US Forces were put at DEFCON 2. On 26th through the 27th of October, Khrushchev sent Kennedy a message stating that the USSR would remove missiles from Cuba in return for a promise from the United States not to invade the island.

Resolution to the crisis was now looking hopeful but later a second letter was sent by Khrushchev which provoked debate again.

It demanded that the deal would also require the removal of U.S Jupiter Missiles from Turkey. That same day a U.S U2 reconnaissance jet was shot down over Cuba.

Kennedy prepared for an attack on Cuba within days as they search for any remaining diplomatic resolution.

That night, Kennedy ignored Khrushchev’s second message and proposed to the Soviet Union steps for the removal of Soviet Missiles from Cuba under the supervision of the United Nations and a guarantee that the United States would not attack Cuba.

Attorney General Robert Kennedy was sent to meet secretly with the Soviet Ambassador Anatoly Dobrynin and Indicated that the United States was planning to remove the Jupiter missiles from Turkey anyway and within six months.

This was to be kept top secret. The next morning on October 28th Khrushchev issued a public statement that Soviet missiles would be dismantled and removed from Cuba.

The crisis was over. The world escaped the nuclear war in October 1962 largely because of the cautious natures of Kennedy and Khrushchev.

In 1963 a telephone hotline was set up to give instant contact between the two leaders and a nuclear test ban treaty was signed.

In 1968 the Nuclear Non-Proliferation Treaty was signed meaning the superpowers promise not to supply nuclear technology to other countries.