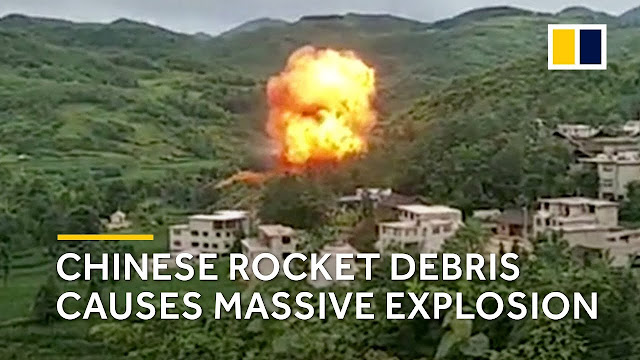 China became the first country to land on the back of the moon. This amazing achievement reflects the great progress of China’s space engineering today.

With its highest annual launch frequency and technical capabilities for manned spaceflight, China became one of the world’s powerhouses in aerospace engineering.

But behind countless successes, China’s aerospace engineering also has its dark side.

In this article, we will understand that China initially chose to let the rocket fly over the residential area.

We will also understand their efforts to make up for this problem in the research and development of reuse rockets,

In the mid-cold war, the United States and the Soviet Union kept covering up their advanced nuclear weapons and missile technology.

In 1957, the Soviet Union launched the first man-made satellite. And China soon realized that they need their own space engineering to keep up with the world.

In 20 years, China has built three main launch sites that can be used to launch missiles and satellites.

These launch sites are located inland areas thousands of kilometers from the coast to keep them secret enough when enemy attacks arrive.

And this comes at a price because the rocket will fly directly over densely populated areas when it is launched.

There are several factors that need to be considered when selecting the launch site.

After the rocket takes off, it needs a pitch operation to increase the horizontal speed required for orbit.

Therefore, the launch site is usually built on the beach so that the wreckage of the rocket can fall directly into the sea.

Another consideration for site selection at the launch site is the dimension. The launch site near the equator can get extra speed for more rotation of the earth

It takes less energy to get the rocket into orbit. But in the middle of the Cold War, due to the tense situation, China built the launch site very north

They developed a large launch vehicle and successfully launched and recovered a satellite.

But in order to catch up with the United States and the Soviet Union as soon as possible, their security standards have been lowered.

In 1996 China launched the largest rocket they ever built, the Long March 3B carrier rocket.

The rocket deviated from the correct course immediately after take-off and crashed into a nearby village after 20 seconds.

The disaster caused six deaths but many foreign reports have reported that the death toll may reach hundreds.

Although the disaster was caused by an unpredictable failure of the rocket.

But China has not stopped launching rockets over densely populated areas.

There have been several reports of rocket wreckage hitting residential houses in the past decade.

Many launches in China were carried out at the Xichang Satellite Launch Center.

For the launch of the Long March III B carrier rocket, the four boosters will be separated a few seconds before the first separation.

Although China wants them to fall into unmanned forests, But there are still about 14 villages in the path from the launch site.

The government will issue evacuation notices to local residents a few days before the launch event.


What’s worse is that the Long March 3B rocket (below the stage) uses highly toxic contact spontaneous combustion fuel.

So residents were told that the rocket should stay away from the wreckage after the crash.

Every country’s aerospace engineering has a culture in it. But China ’s history of spaceflight has caused many other countries in the world to lose their trust.

Although they have one of the world’s most advanced aerospace projects, China is still prohibited from participating in the International Space Station project.

Although China is willing to invest a lot of money to participate, the US government still shuts China out, fearing that China will take the opportunity to steal technology.

But from the perspective of human security, it ’s no wonder they do n’t let China participate.

But China has finally made some changes to their rocket falling habits.

They built a new launch site on Hainan Island to allow China ’s latest large rocket to fly over the ocean when it is launched.

China also installed grille rudders on some of their rockets and similar ones on the Falcon IX rocket.

This allows the rocket to control its precise landing point when it crashes.

But this can at least protect innocent people from being hit by rockets.