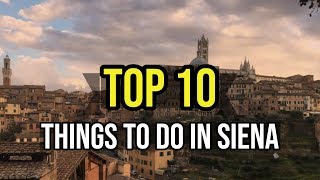 Siena is a historic city in the region of Tuscany and a listed world heritage site. For those visiting Siena, there is an abundance of beautiful architecture such as the Gothic town hall and the Torre del Mangia, a slender 14th-century tower.

The city has a range of fantastic museums and galleries and is also known for its legendary Palio horse race that takes place twice a year and draws hundreds of spectators.

The historic center of Siena is one of the best-preserved in the region and is filled with beautiful and interesting places to visit.

Top 10 Things To Do In Siena

10) At number 10 is the Piccolomini Palace

The gigantic Palazzo Piccolomini was built between 1460 and 1495 and is one of the earliest examples of Renaissance architecture and design in the world.

Visitors can explore a 15th-century Tuscan palace and see the former home of Pope PiusII.The palace has an incredible interior filled with beautiful frescoes, priceless artworks, and interesting artifacts.

This slender 102m tall tower stands proudly at the end of the Palazzo Pubblico and is one of the best-known attractions in the city.

The tower was constructed at the same time as the palace and features a similar two-tone design with a white stone crown.

The Complex of Santa Maria Della Scala, in front of Siena’s grand Duomo, is one of the oldest hospitals in Europe.

As one of the first places to offer lodging and food to pilgrims and abandoned children, it’s an important historical and cultural icon.

No longer in use as a house of medicine, the whole complex now hosts several museums and splendid monumental areas.

7) Number 7 is the Botanical Garden

The Botanical Garden is located by Piazza Sant Agostino and was founded in 1784.

The garden of two and a half hectares is perfect for families with children who are interested in exploring the outdoors and are curious about nature.

Visitors are able to enjoy the many local, as well as exotic plants kept within the Botanical Garden and all are easily identified as they are labeled with both their scientific and botanical names.

6) At number 6 is the Fortress of Montepulciano

The Fortress of Montepulciano is a fortified castle overlooking the town and the surrounding Tuscan countryside.

The fortress has been destroyed and rebuilt several times over the centuries and visitors can explore a fascinating Italian history written in the halls and walls of the Fortress.

Then take in the spectacular scenery of Tuscany from the tower and see why the castle was fought over for centuries.

Visitors can tour the beautiful building of the Duomo of San Gimignano and see the famous13th-century frescoes, the small chapel dedicated to Santa Fina and many other riches within the Duomo.

This Romanesque-Gothic cathedral completely comes to life with an audio guide that explains the history and secrets of the treasures within.

Then visit The Museum of Sacred Art with its paintings, sculptures, textiles and more, from the nearby churches and convents.

This delightful park can be reached in 5 minutes by foot from Piazza del Campo.

The park is situated in a valley looking up at the city and has a large green lawn, a goldfish pond and a fenced area with goats, a donkey, peacocks and there are also ducks and geese allowed to roam freely.

Visitors can follow the path through the park to reach a medieval garden that takes you back in time showing how gardens were kept during the medieval era.

3) At number 3 is the Abbey of Sant Antimo

Explore the stunning SantAntimo Abbey home to Benedictine monks in the early 12th century and restored by architect Giuseppe Partini.

Now used as a concert and cultural venue, visitors can see the Carolingian Chapel, the crypt, the monastic pharmacy, St. Benedict’s herb garden and much more at this must-see the historical site.

Piazza del Campo is the principal public space of the historic center of Siena and is regarded as one of Europes greatest medieval squares.

The shell-shaped space was built sometime before the 13th century and provided a site for merchants and market-goers to convene and sell their wares.

The Piazza remains the city’s focal point and contains some stunning architecture that is well worth viewing.

1) And at number 1 is the Cathedral of Siena

Siena Cathedral is one of the premier pieces of Gothic architecture in the whole of Italy.

Originally constructed in the 13th century, the cathedral has stood for hundreds of years as an icon of the city and sits in the Piazza del Duomo in the historical town center.

The façade and exterior of the cathedral is magnificent and features a beautiful white stone and marble design.

The interior of the church is quite breathtaking and contains some stunning frescoes by Donatello, Michelangelo and more!

So that sums up our top 10 things to do in Siena, we hope you enjoyed it.

Top 10 Things To Do In Riga