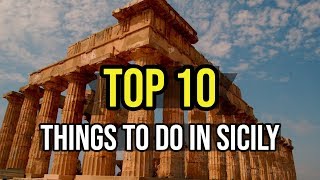 Sicily is the largest Mediterranean island and is located just off the toe of Italysboot.On the island’s eastern edge is Mount Etna, one of Europe’s highest active volcanoes and a big attraction for visitors.

Sicily’s rich history is reflected in sites like the Valley of the Temples and in the Byzantine mosaics at a former royal chapel in the capital city Palermo.

Whether it is a stunning natural setting, a culture-rich city or an archaeological site of immense historical importance, there are countless things to see and do in Sicily

This fuming mountain, located in the Sicilian province of Catania, is Europes largest active volcano and a UNESCO World Heritage site.

There are numerous ways to experience the volcano, from enjoying distant views of its moldering away, to ascending the volcano itself on foot or by cable car.

The other point of departure is Etna Nord from where you may walk or take 4X4 buses up to the observatory at 2,400m.

With plenty of stops throughout Palermo, covering all major tourist attractions, the Hop-on hop-off Bus is a great way to explore the city.

The two different lines have been specially chosen to give a comprehensive introduction to Palermo’s rich history and dazzling culture.

With audio guides, free Wifi on board and unbeatable panoramic views, visitors can get to know the ins and outs of this fantastic city.

8) At number 8 is the Zingaro Nature Reserve

The Zingaro Nature Reserve is the island’s first nature preserve, complete with more than 650 species of plants, as well as animals that range from eagles to small mammals.

Hiking is the main activity, but you can also climb down to the blue-green waters of some beautiful beaches.

It is easily accessible from Scopello or Trapani and visitors will be delighted by the beautiful views from the path overlooking the sea.

7) Number 7 is the Palazzo Branciforte

The Palazzo Branciforte has been restored to its former glory in the heart of Palermo, after being built as an aristocratic residence in the 1500s.

As well as promoting the city’s cultural development it’s a great place to see Italian history, archaeology, art, literature, and Italian culinary skills all coming together.

6) At number 6 is the Villa Romana del Casale

Built sometime during the 4th century, Villa Romana del Casale contains some of the best and most complex mosaics from the Roman Empire.

Named one of the UNESCO World Heritage sites in Italy, the villa remained forgotten after the 12th century, only to be made famous in the19th century when the mosaics were found.

The Zisa is a castle in the western part of Palermo that was founded by King William I, but completed under the reign of William II in 1190.

The castle is a striking example of palatial architecture, with elaborate arches along the front façade and the Fountain Room, which is the castle’s main reception area that reaches two-stories in height.

Visitors can explore this Arabic gem in the heart of Sicily with an audio guide to fill you in on its fascinating past and bring alive the history.

4) At number 4 is the Cathedral of Monreale

The Cathedral of Monreale is a UNESCO Heritage-listed landmark in Palermo, famed for its ornate cloisters and bright gold mosaics featuring biblical references.

This beautiful Norman church is one of the most impressive architectural legacies of the Italian Middle Ages.

For a birds-eye view of the beautiful cloisters, the geometric garden, and the cathedrals mountainous surrounds, visitors can climb the stairs to the terrace of the cathedral to admire the scenery.

3) Number 3 is the Palermo Gallery of Modern Art

The Palermo Gallery of Modern Art boasts over a century of history and is packed with masterpieces.

All pieces on display are meant to reflect Italy’s ever-changing trends in fashion and taste across the early 20th century.

Visitors can browse over 200 works, including 176 paintings and 38 sculptures representing some of the best modern art in Italy from local and international artists.

2) At number 2 is The Botanical Gardens

The Botanical Gardens of Palermo are among the oldest centers for botanical studies in the Mediterranean region.

This green oasis is located in the midst of Sicily’s capital and their 10 hectares are home to a staggering 12.000 plants.

A 15 meter high wood of bamboo, an aquarium adorned with floating lotus flowers, 19thcentury statues, greenhouses, and pavilions come together to create an enchanting environment, a world away from the hustle and bustle of the city outside.

1) And at number 1 is The Valley of the Temples

Just outside of Agrigento, the Valley of the Temples is an archaeological park with remains of eight temples that were built between the 5th and 6th centuries BC.

Though all the buildings are notable, the Temple of Concordia is particularly important, due to it being one of the most excellently preserved Greek ruins in existence.

Measuring about 1,300 hectares, the park is one of the largest archaeological sites in the world and a must-see for any visitor to Sicily.

So that sums up our top 10 things to do in Sicily, we hope you enjoyed it.

Top 10 Things To Do In Birmingham