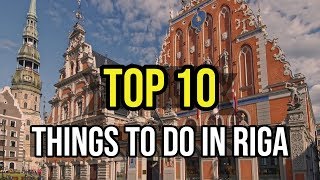 Riga, Latvia’s capital, is located on the Baltic Sea at the mouth of the River Daugava and is the largest city within the three Baltic States.

The city has an absorbing history to uncover and is considered a cultural center that is home to a variety of museums and concert halls.

The city is also known for its wooden buildings, art nouveau architecture and medieval OldTown.The old center is a UNESCO World Heritage Site with a labyrinth of streets, Medieval churches and guild halls.

Top 10 Things To Do In Riga

10) At number 10 is the Open-Air Ethnographic Museum

Established back in 1824, the museum is set in 87 hectares of pine forest on the Eastbank of Lake Jugla.

The Open Air Ethnographic Museum is a lakeside park where fine examples of architecture from all over Latvia have been lovingly preserved.

Visitors can step back in time by visiting peasant homes, workshops, windmills and priceless treasures like the richly ornamented Usma Church.

It’s an attraction not to be missed if you want to learn more about Latvian culture and history.

Visitors can see the best that Riga has to offer with a specially designed bus route covering every major sightseeing destination in the city.

With three routes running between Riga’s three central districts and buses running every30 minutes, visitors can explore the city at their own pace.

Highlights include the Freedom Monument, Nativity Cathedral, National Opera House, Riga Castle, and many, many more!

8) At number 8 is the House of the Blackheads

The House of the Blackheads is a magnificent building situated in the old town of Riga. The original building was erected during the 14th century for the Brotherhood of Blackheads, a guild for unmarried merchants and ship-owners in Riga.

There is now a very interesting museum with the lower floor covering the history of the buildings, the middle floor housing an impressive silver collection and the upper floor showcasing the beautiful ballroom and chandeliers.

7) Number 7 is the Cosmos Illusion Museum

Visitors can interact with over 30 physics-defying optical illusions and puzzles, and see paintings morph as you move around them.

The Museum will make you question the evidence of your own eyes with an array of mind-bending exhibits.

With an enormous mirror maze, a galaxy of fiber-optic lights and much more, there something for everyone at the Cosmos Illusion Museum.

St Peter’s Church was begun at the start of the 13th century, but had two more phases of construction in the 15th and 17th centuries, leaving it with a mix of architectural styles, from Romanesque to Baroque.

During the last reconstruction, an elevator was installed, taking visitors up to the second gallery at a height of 72 meters for the best views of Riga.

5) Number 5 is The World of Hats Museum

This museum in Riga showcases over 400 hats from all around the world, from traditional head-dresses to hats, shawls, bonnets or headbands.

Some areas valuable as ancient jewels and each comes with its own intriguing story.

From bonnets to helmets and beyond, anything you can wear on your head has its rightful place in Riga’s unique World of Hats Museum.

4) At number 4 is the Fashion Museum Riga

Take a tour and see the fascinating evolution of clothing at the Fashion Museum in Riga. Visitors can see the history of fashion unfold with iconic styles down through the decades.

See traditional Latvian costumes, 19th-century dress and fashionable European and American trends from the Roaring 20s all the way up to the late 70s.

Opened in 1912, this 16-hectare zoo features over 450 species of animals and birds, that all live in one of the most beautiful locations in Riga on the shores of Lake Kisezers undergrand pine trees.

The zoo is great for a family day out and has some lovely enclosures including the GiraffeHouse, the Tropical House, the Rural Farmstead, the Tiger House and many more.

2) At number 2 is the Three Brothers, Riga

The three medieval dwelling houses in Old Town Riga built closely together have been called the Three Brothers for centuries and legend has it that they were built by three descendants of one family.

In the medieval times, Maza Pils Street was located on the outskirts of Riga and craftsmen lived there.

Today, the buildings that are several centuries old house the Latvian Museum of Architecture.

1) And at number 1 is the Canal Cruise Riga

Take a comfy cruise on a boat with views, making a great way to see the sights of Riga.

Canal Cruise Riga is the best way to see how over 800 years of history have shaped this stunning city.

So that sums up our top 10 things to do in Riga, we hope you enjoyed it.

Top 10 Things to Do In Rome