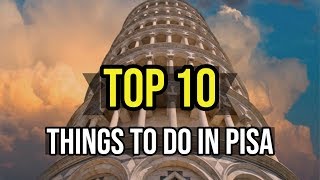 Pisa is a city in Italy’s Tuscany region best known for its iconic Leaning Tower. Located on the western coast of Italy, Pisa is only 20 minutes from the Ligurian Sea and has great transport links to Florence.

The city was an important historical trade centre and one of the four Maritime Republicsduring the Middle Ages.

Today the city still maintains its ports and this accounts for much of its economy, as well as a developed tourist infrastructure with a fantastic array of beautiful historical buildings.

Top 10 Things To In Pisa

The 56m tall white-marble cylinder is the bell tower of the Romanesque, striped-marble cathedral that rises next to it in the Piazza dei Miracoli.

This very famous landmark was constructed in the 12th century after the cathedral, it was soon found that the foundations were unstable and the building began to lean.

Today, the tower still leans and measures have been taken to ensure it doesn’t collapse. Visitors can climb to the top of the tower for a surreal tilted view of the surrounding city.

9) Number 9 is the Cathedral of Santa Maria Assunta

The Cathedral is dedicated to St. Mary of the Assumption and was founded in 1064. Its architectural style is a mix of Romanesque and Arabic, with elements of Byzantine and Mediterranean.

The front façade of the cathedral is very ornate with a series of beautiful stone and marble arches and three opulent bronze doors.

The structure is a masterpiece of religious construction and is a fantastic site to visit.

8) At number 8 is The Baptistery

Although located within the Piazza Dei Miracoli, the Pisa Baptistery is a worthy attraction in its own right.

This immense structure stands at 54m high and has a gorgeous exterior design with many different statues, arches, and adornments.

Inside the baptistery, the rich decoration continues and you can find a pulpit and a font that are both highly decorated.

7) Number 9 is take a walk along the River Arno

The River Arno is one of the main rivers in Italy and Pisa was built around this waterway. The river stretches for 241km and has its source at Mount Falterona.

The section of the Arno that runs through Pisa provides a truly beautiful landscape and is an amazing place to simply walk along and admire the views.

6) At number 6 is the University of Pisa Botanical Gardens

Located in the heart of the historic old town this beautiful Botanical Gardens is maintained by Pisa University and is a wonderful place to visit.

Visitors can get inside one of the world’s oldest academic botanical gardens, founded in 1544, and walk between an arboretum, conifers, aquatic plants, medicinal plants, and into a herbarium containing thousands of species.

5) Number 5 is the Palazzo dei Cavalieri

Piazza dei Cavalieri, the Knight’s Square, is one of the most important squares in Pisa.

Throughout history it was a centre of political power, today it is the symbol of the academic excellence because of the marvellous Palazzo della Carovana.

This beautiful Palace was constructed in the 16th century and was originally the HQ of the Knights of St. Stephen.

As one of the premier palaces in Pisa and the Knights Square is a must-see.

4) At number 4 is the Sinopie Museum

Home to some fascinating frescoes, this museum safeguards several preliminary sketches and fresco preparatory drawings drawn by artists in red earth pigment on the walls of the Camposantoin the 14th and 15th centuries, before frescoes were painted over them.

The museum is a compelling study in fresco painting, with short films and scale models filling in the gaps, making a really interesting visit.

3) Number 3 is Tuttomondo, the mural by Keith Haring

Tuttomondo is a truly magnificent piece of artwork located just off of the Piazza Vittoria Emanuele II.

Although Pisa has a host of historical buildings and beautiful Italian architecture, it also features a beautiful mural by this world-renowned American artist.

Bursting with colour, the mural features 30 different figures in various poses of life and vitality and displays a vision of peace and harmony.

For those interested in art, this mural is an absolute must-see and it creates a stark contrast to the other buildings in Pisa.

2) At number 2 is the Museo Nazionale di San Matteo

This inspiring repository of medieval masterpieces sits in a 13th-century Benedictine convent on the Arnos northern waterfront boulevard.

It features a group of paintings from the 12th- to 18th- centuries, and a rich collection of sculpture from the Pisano School.

It also has a large number of interesting ancient ceramics as well as other archaeological artefacts.

1) And at number 1 is Santa Maria Della Spina

The Church of Santa Maria Della Spina is located on the left-hand bank of the River Arno opposite the National Museum of Pisa.

Originally created in the 13th century, the building features a Gothic style with a series of opulent pointed pediments and several rose windows.

Although this church is really quite small, it is considered one of the most beautiful in Pisa due to its ornate design and well worth a visit.

So that sums up our top 10 things to do in Pisa, we hope you enjoyed it.