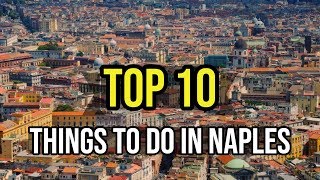 Naples is a vast city located on the western coast of Italy facing the Tyrrhenian Sea and its port is one of the most important in the Mediterranean.

Nearby is Mount Vesuvius, the legendary still-active volcano that destroyed the nearby Roman town of Pompeii and is now an important tourist destination.

Due to the extensive history of this region, Naples is full of historical architecture, squares, and churches plus a host of modern amenities and attractions.

Top 10 Things To Do In  Naples

Built-in the 1600s for Philip III, the Royal Palace was one of four residencies of the bourbon dynasty of Naples.

Visitors can explore this luxurious building and grounds, and see the Court Theatre, theThrone Room, the Maria Cristina Hall of Savoy and the Royal Chapel.

Stroll up the grand staircase and into the historical apartments and see the stunning marble, amazing frescoes, lavish furniture, and beautiful chandeliers.

Then walk in the Royal Gardens and soak up incredible views of the Gulf of Naples and Mount Vesuvius.

The Hop-on Hop-off Bus Naples is the best way to make the most of this UNESCO World Heritage site and one of the most historic cities in the world.

Discover 3000 years of culture with a fleet of luxury buses ready to carry you around the historic center and along the stunning waterfront.

Visitors can enjoy panoramic views of the beautiful surrounding as you travel in style. The luxury buses are equipped with comfy seats, open-top decks, and multilingual audio guides, giving a full history of the area.

8) At number 8 is Mount Vesuvius

Classified as a Stratovolcano, Mount Vesuvius dominates the skyline and landscape surrounding Naples and is a legendary volcano that famously erupted in 79 AD and caused the destruction and burial of Pompeii and Herculaneum.

About 9 km east of Naples and a short distance from the shore, visitors can see pine forests, incredible landscapes and the Gulf of Naples from the slopes of Mount Vesuvius.

Join an experienced guide for a fun, panoramic climb and learn all about the history of one of the worlds most famous volcanoes.

Piazza del Plebiscito is the largest public square in Naples and the site of many buildings of great historical and artistic importance.

This noble piazza is enclosed on one side by the royal palace and on the other by the neoclassical façade of the church of San Francesco di Paola.

For continental grandeur, it’s hard to beat Piazza del Plebiscito, for whichever way you look the view is worth admiring.

6) At number 6 is the Naples National Archaeological Museum

Located to the north of the Harbour and housed in a 16th-century ornate palace originally built as a residence for a cavalry barracks, the National Archaeological Museum of Naples is one of the most important museums in the world for archaeology.

Inside you can find an extensive collection that includes a wide array of Roman and Greek artifacts plus a selection of works from both Pompeii and Herculaneum.

The Castel Nuovo stands out as one of the main features in the skyline of Naples and is located in close proximity to the famous Piazza del Plebiscito.

Created in 1282, the castle features 5 circular towers and a fantastic triumphal arch that was added at a later date.

Visitors can take a tour of the castle and admire the beautiful towers, stand inside the central courtyard, see the painted ceiling of the Baron’s Hall and climb the castle ramparts for stunning views of Naples and the harbor.

4) At number 4 is Naples Cathedral

Dating as far back as the 13th century, the Cathedral of Duomo is a magnificent structure and stands as the main church in Naples.

Located on the Via Duomo, this religious building combines a mix of styles including Gothic, Renaissance and Baroque.

The interior is stunning, with the main knave framed by a series of huge columns and the surrounding decoration is exquisite.

3) Number 3 is the Capodimonte Museum

The Capodimonte Museum is one of the largest museums in Italy and once a residence for the Bourbon rulers of the Kingdom of Naples.

Visitors can view the regal decorations of the royal apartments and see the Farnese Collection plus artwork from Caravaggio, Warhol and more.

Outside is a beautiful park with fountains, sculptures and lovely greenery to be explored.

The Naples Zoo is a zoo in Naples created in the1940s, which has always hosted numerous animals, including many endangered species.

The Zoo is the symbol of the city that has been reborn recently as it was left completely abandoned for many years.

It is now a favorite spot for families as they get to see some really rare animals.

1) And at number 1 visit the ruins of Pompeii

Pompeii was an ancient city that sat in the shadow of the iconic Mount Vesuvius, the settlement was highly advanced but was destroyed at its peak during the devastating eruption of the volcano in 79 AD.

Pompeii stands in a fantastic condition, due to the huge layer of ash that was deposited and acted as a preserver.

Today you can visit Pompeii and walk through the extensive ruins including the Amphitheatre, the Temple of Apollo and the Temple of Jupiter.

Visitors can also see plaster casts of many of the unfortunate victims who were buried under the ash and remain locked in their death pose.

So that sums up our top 10 things to do in Naples, we hope you enjoyed it.

Top 10 Things To Do In Málaga