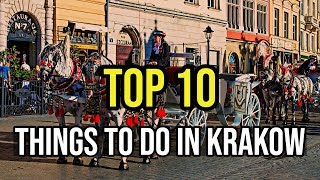 Kraków, lies on both sides of the upper Vistula River and is one of the largest cities in Poland.

It is known primarily for its grand historic architecture, cultural leadership, and interesting attractions, with its old town area a UNESCO World Heritage site.

The marketplace and Main Square have existed since the 13th century, and a modern landscaped area is laid out on the site of past fortifications.

Some 14km south-east of Kraków, the Wieliczka salt mine has been welcoming tourists since1722 and today is one of Poland’s most popular attractions.

It is a subterranean labyrinth of tunnels and chambers that are about 300km distributed over nine levels. The deepest is about 327m underground, of which a small part is open to the public via two-hour guided tours.

Visitors can see breathtaking underground galleries, chambers, and lakes, and learn about mining techniques from the Middle Ages to today, in the world’s largest mining heritage museum.

9) Number 9 is the Stained Glass Workshop and Museum

More than a static museum, this attraction allows you to watch stained glass craftsmen making use of centuries-old skills.

More than 200 windows produced by this workshop adorn buildings around Krakow today, most famously in Wawel and at the Franciscan Church.

Guided tours in English are on the hour and will bring you through beautiful exhibitions of stained glass and into the studio where you can see pieces being created.

8) At number 8 is Wawel Castle

A monument of immeasurable national importance, the UNESCO-listed Wawel Castle has the wow-factor.

The castle has the architecture of every style from Romanesque to Baroque and was the seat of the King of Poland from the 13th century to the 17th century.

But since the 1940s Wawel Castle has been a national museum, presenting the riches of the Polish monarch through sumptuous interiors, beautiful paintings, intricate tapestries, and a marvelous treasury and armory.

7) Number 7 is the Market Square

One of the largest Medieval squares in Europe, Kraków’s central marketplace has been the commercial, social and administrative focal point of the city since the middle of the13th century.

This grand plaza measures 200 meters by 200 and was laid out as a piece of Medieval urban design.

Surrounded by gorgeous pastel yellow and peach buildings, including the 13th-century GothicTown Hall Tower, it’s one of the most beautiful European squares.

6) At number 6 is the Time Elevator Krakow

See a visual representation of Krakow’s storied past come alive before your eyes and learn1000 years of history in 15 minutes.

Visitors can see amazing visuals projected onto a large 3D model of Krakow and hear the fascinating tales that defined the city’s history.

Watch the Vistula River change course over the centuries, and see the city morph over time into the vibrant modern city it is today.

5) Number 5 is the Krzysztofory Palace

Krakóws Krzysztofory Palace is a stunning building, built in the 13th century as a residence for wealthy, middle-class families.

Visitors can see the stunning interior of the historic palace including educational exhibits, models, multimedia elements and a movie about old Kraków.

Follow the creation and development of Kraków from 1909 to today in the beautiful KrzysztoforyPalace.

4) At number 4 is The National Museum of Krakow

The National Museum Krakow is home to thousands of individual art pieces.

Visitors can enjoy the best of Polish and international art and see centuries worth of Polish armaments and military uniforms in the Gallery of Arms and Uniforms exhibition.

In the Gallery of Decorative Art see the international style and design from the 14th century to the Art Nouveau period.

The museum is also home to a constant flow of amazing temporary exhibitions and well worth a visit.

In the 1820s fortifications that once enveloped the Old Town were dismantled and the moat was leveled off and the four-kilometer belt was planted with English landscape gardens.

The green belt of Planty Park rings the whole area of Krakow’s historic Old Town. Pathways weave this way and that, past sculptures and babbling fountains, and cafes spill onto the sidewalks.

Built on the foundations of an earlier church St. Marys Basilica has been casting shadows over Krakow’s Market Square since the 13th century.

It is one of the most magical buildings in this fairytale city.

The 14th-century stained-glass windows and colorful wall paintings fill the interior with light and color, and the richly detailed blue star vault of the nave is stunning.

Visitors can see the best that Krakow has to offer with specially designed bus routes covering all the major sightseeing destinations in the city, home to stunning architecture, world-class museums and great attractions.

Discover the many sights and highlights of Krakow at your leisure with a Hop-on Hop-off sightseeing bus.

So that sums up our top 10 things to do in Krakow, we hope you enjoyed it.

Top 10 Things To Do In Stockholm