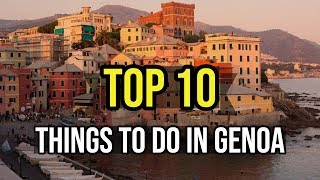 Genoa is a large port city located in the north-west of Italy. It is the regional capital of Liguria and lies in the center of this long coastal region at the top of Italy’s boot.

The town’s maritime importance goes back centuries, and today it is still a major commercial port.

Due to the city’s illustrious history, Genoa has many welcoming Piazzas, a host of Renaissance and Baroque architecture and fantastic churches, along with some outstanding museums and galleries, offering visitors a variety of first-class tourist attractions.

Located next to the Piazza Carciamento in the main harbor area, the Aquarium is a brilliant attraction for all the family.

Known as one of the best and biggest aquariums in Europe, it is home to around 12,000 animals including penguins, dolphins, sharks, reptiles, amphibians, and birds.

Built inside an old ship in the harbor, there is plenty of space spread across 70 rooms where visitors can learn all about the ocean and its inhabitants.

The Hop-on Hop-off Bus Genoa is the best way to see all you want in this large port city, home to stunning architecture, world-class museums, and great attractions.

From the beautiful Piazzas to the historic harbor district, hop on and off whenever you like, at all of Genoa’s best, most convenient locations for sightseeing.

8) At number 8 is Piazza De Ferrari

Located in the center of the old town in the Molo district, the Piazza De Ferrari is one of the central points of Genoa and offers a myriad of different sights.

The main feature of the Piazza is the large ornate fountain that is surrounded by grand buildings, there are also several small restaurants, souvenir shops, and cafes with outdoor seating to relax in.

Designed by Italian architect Renzo Piano, The Biosphere is a stunning spherical glass and steel structure in Genoas Old Port.

Packed with over 150 species of plants and flowers including coffee and banana plants, rubber plants, and cinnamon, visitors can learn about man’s relationship with plants and see an indoor rainforest with birds, reptiles and butterflies.

6) At number 6 is Via Garibaldi

Via Garibaldi is one of the most important streets in Genoa and a World Heritage Site.

The street has existed since the 16th century and is full of beautiful palaces, historical apartments, and museums.

This narrow street provides a staggering amount of fantastic architecture with a succession of carved and painted embellishments, frescoes, grand arcades, balconies, courtyards, and entrances crowned by crests of noble families whose homes these were.

5) Number 5 is the Galata Sea Museum

Galata Sea Museum is one of the largest maritime museums in the Mediterranean. Located in the old harbor, visitors can learn about Genoa and Italy’s seafaring past.

Step on board a 17th-century replica galley ship, learn about Italian emigration in the1800s and see amazing views of Genoa from the top floor viewpoint.

With high-tech displays, over 40 multimedia stations and engaging exhibits, the GalataSea Museum is a great attraction for all the family.

4) At number 4 is San Lorenzo Cathedral

More commonly known as Genoa Cathedral, the church of San Lorenzo is a fantastic building with a striped marble and stone front façade.

Created in 1118, this church has stood for hundreds of years and its interior is spectacular with a ceiling immensely decorated with frescos and beautifully colored artwork.

3) Number 3 is the Royal Palace and Spinola Gallery

Home to a number of royal families over the years, the Palazzo Spinola is the perfect setting for the National Gallery’s art collections, which are especially strong in Flemish painters and those of the Italian Renaissance.

Visitors can stroll in the meticulously manicured gardens, browse the house’s collection of masterful 17th-century artworks and see the incredible hall of mirrors at the Royal Palace of Genoa.

The immense harbor of Genoa stretches for 22km of coastline and is home to a large number of docks and ports for commercial, recreational and pleasure purposes.

At the central point of the harbor network to the left of the bay is also the fantasticLanterna di Genoa, which is a large 76m tall lighthouse that has stood since the 1100’s in some form.

The harbor is really worth a visit with a huge variety of ships to see and a large selection of bars, restaurants, and museums.

1) And at number 1 is the Bigo Panoramic Lift

The Bigo, a panoramic lift at the Aquarium of Genoa and offers an extra special birds-eye view of one of Europes richest and most vibrant historical cities.

Climb up 40 meters in a unique elevator designed by Italian architect Renzo Piano, and learn about the history of Genoa from the interesting audio guide as you take in the 360-degree view.

So that sums up our top 10 things to do in Genoa, we hope you enjoyed it.