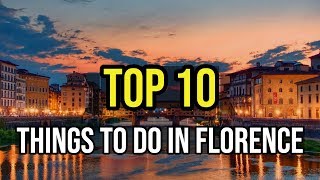 Florence is renowned as one of the most cultural and historical cities in the world and is packed full of amazing architecture and places of significance.

As the capital of the Tuscany region of Italy, Florence lies in central Italy and is hailed as the birthplace of the Renaissance movement.

Florence’s museums, palaces, and churches house some of the greatest artistic treasures in the world.

Top 10 Things To Do In  Florence

Located just off of the Piazza Della Signoria, the Uffizi Palace and Gallery is a renowned art museum and is considered one of the most important Italian museums.

The building itself is spectacular and the inner courtyard features a series of intricate columns and arches that are adorned with marble statues. Inside the museum, there is an immense collection of Renaissance

Art from artists such as Botticelli, Da Vinci, Titian, and Raphael. It houses one of the best collections of Renaissance art in the world with countless highlights.

A wonderfully landscaped sculpture park behind the Pitti Palace, Boboli Gardens is an extravagant mix of nature, architecture, and sculpture.

A visit here is a great chance to step away from the bustle of the city and appreciate nature with garden highlights including a 6-meter Egyptian obelisk from the time of Rameses II, magnificent grottoes, and the Fountain of Neptune.

8) At number 8 is the Ponte Vecchio

The Ponte Vecchio is a picturesque medieval stone arch bridge over the Arno River and is famous for still having shops built into the sides of the bridge.

Butchers initially occupied the shops, but the present tenants are jewelers, art dealers, and souvenir sellers.

At the midpoint, the bridge has a viewing area, and visitors are rewarded with fantastic sights down the River Arno.

Located in front of the main railway station, the Church of Santa Maria Novella is a beautiful structure that is another fine example of Renaissance architecture using white marble to create a striking front facade.

The interior, highly decorated with detailed frescos and striking artwork, has multiple chapels dedicated to various wealthy and prominent Florentine families during the Renaissance-era.

The Basilica, with its T-shaped base and three naves, was built in the traditional style of Franciscan convents.

One of the most beautiful churches of Florence, the Basilica of Santa Croce is also known as the Temple of the Italian Glories, as many important artists, writers and scientists are buried here.

It houses the tombs of Michelangelo, Galileo, Rossini, and others, also the empty tomb of Dante
.

With 44 stops throughout the center of Florence, covering all major tourist attractions, the hop-on Hop-off Bus is a great way to explore the city.

The fleet of air-conditioned buses will whisk you between stops, specially chosen to give a comprehensive introduction to Florence’s rich history and dazzling culture.

With audio guides in eight languages and unbeatable panoramic views, visitors can get to know the ins and outs of the Tuscan capital in detail.

4) At number 4 is Palazzo Pitti and Palatine Gallery

Located on the Southern Banks of the River Arno, the Palazzo Pitti has stood since the1400’s like a fine example of Renaissance architecture.

Although once home to Italian royalty and powerful families such as the Medici’s, the palace now stands as the largest museum complex in Florence and is a must-see for all visitors.

The Palatine Gallery has works by Raphael, Titian, Rubens, and more, with sumptuous masterpieces on display.

Located on the South Bank of the River Arno, the Piazzale Michelangelo sits high on a hill near the Boboli Gardens and the Palazzo Pitti.

In the center of the square stands a wonderful Bronze replica of Michelangelo’s statue of David, but the main reason for a visit here is the view from the Piazza that is unrivaled and you can truly see Florence in all its glory, framed against the River Arno.

2) At number 2 is Florence Cathedral

Possibly one of the most celebrated cathedrals in the world, the Duomo as it is simply known in Florence is the jewel of the city. It was initially constructed in 1436, but the astonishing front facade wasn’t completed until the 19th century.

Located in the center of the old city, the exterior and front facade of the Cathedral covered in white marble with red, pink, and green designs. The immense dome of the cathedral and can be accessed via a series of steps and is worth the climb for fantastic views from the top.

1) And at number 1 is the Accademia Gallery

Located in close proximity to the Piazza del Duomo, the Gallery of the Academy of Florence is a hugely important museum. Opened in the 1780s as a teaching facility for students of Fine Arts, Florence’s Accademiais now synonymous with Michelangelo’s towering 5-meter tall statue of David.

Aside from this original piece of genius, the museum also houses other sculptures and works from Michelangelo and is split into several different interesting halls.

Here you can find a wealth of beautiful art, and also a great deal of history.

So that sums up our top 10 things to do in Florence, we hope you enjoyed it.