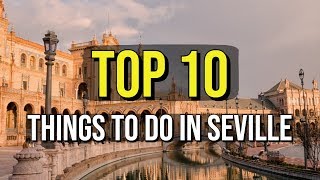 Seville, one of the largest Spanish cities, is the capital of southern Spain’s Andalusia region and is a city rich in Moorish heritage.

This is visible in everything from the colorful painted tiles that adorn many buildings, to the lobed arches of the palaces.

Seville is a popular tourist destination and the city has one of the largest old towns in Spain.

It is famous worldwide for its culture, monuments, traditions, and artistic heritage, with many attractions both modern and historical making it a great place to visit.

The Seville Aquarium is open all year round and is located next to the river, on CalleSantiago Montoro.

Both fresh and salt-water species are on display with 35 different tanks throughout the attraction housing around 7,000 fish, mammals and reptiles, with more than 400 different species.

Visitors can see the two newly renovated ecosystems, The Rainforest and The Mangrove, home to hundreds of tropical fish.

This aquatic day out is as educational as it is important and the Aquarium of Sevilleworks hard to inform visitors about the dangers facing our oceans.

A circuit on the Hop-on Hop-off Bus Seville takes about 80 minutes and covers all the main highlights and major tourist attractions.

It’s a great way to explore the city and the fleet of comfortable buses will whisk you between stops, specially chosen to give a comprehensive introduction to Sevillesrich history and dazzling culture.

With unbeatable panoramic views, visitors can get to know this famous city in detail.

8) At number 8 is Seville Cathedral

Visitors can explore one of the worlds biggest cathedrals that has a stunning exterior. The inside of Seville Cathedral is just as impressive, with an enormous main hall that houses one of the largest altarpieces in the world.

Flanking the hall, you’ll find 80 individual chapels, dedicated to the many saints and noble figures that played a part in the city’s religious history.

And after you’ve explored the ground levels, climb the legendary Giralda tower and enjoy far-reaching views of Seville and the lush Andalusian countryside.

7) Number 7 is the Royal Alcázar of Seville

The Royal Alcázar is a marvelous UNESCO-listed palace complex that is still in use by the Spanish royal family, and their chambers, staterooms and ornate halls are on the upper level.

The palace is absolutely beautiful with the walls tiled in rich hues, hallways decorated with crystal lamps and vast tapestries, and the intricate ceilings are stunning.

Outside the fountains, lush citrus groves and manicured gardens are enchanting.

6) At number 6 is the Maria Luisa Park

A delightful oasis of green in the heart of the city, the extensive Parque de María Luisa is a lovely place to escape the noise of the city, with a pleasant surprise down every path, whether it’s an ornamental pond, pavilion, sculpture or beautiful fountain.

The park’s broad avenues have twin-rows of tall palm trees, while the body of the park is woven with little trails, there is also a large botanical garden with unusual species from around the world.

5) Number 5 is the Metropol Parasol

Since opening in 2011, the Metropol Parasol, known locally as The Mushrooms, has become something of a city icon.

Designed as a giant sunshade by German architect Jürgen Mayer, it’s said to be the world’s largest wooden structure; it’s certainly a formidable sight with its 30m-high mushroom-like pillars and honeycombed roof.

Lifts run up from the basement to the top, where you can enjoy fantastic city views from the winding walkway and cafe.

The Museum of Fine Arts of Seville was founded in 1839 and is one of Spain’s biggest museums of fine art.

It contains a collection of works from medieval times through the early 20th century and displays a choice selection of works by Spanish artists from the 17th century, the so-called GoldenAge of Sevillian painting.

The Plaza de España is a plaza in the Parque de María Luisa, in Seville, built-in 1928for the Ibero-American Exposition of 1929.

Now a major tourist attraction, there is a spectacular semi-circular brick building, Renaissance in style, and a 500-meter canal that follows the curve of its façade and in the center of it all, is the Plaza itself.

The Torre del Oro means the gold tower and is one of Seville’s most recognizable landmarks.

The 12-sided Tower is a 13th-century military building that dominates the Guadalquivir riverbank and it’s probably one of the most photographed sights in the city.

Visitors can enjoy some spectacular views of the city and the river from the top.

Visitors can explore fascinating exhibits, costumes, props and more in the Flamenco Museum and see how flamenco evolved from a folk art into a national cultural institution.

Enjoy a high-tech tribute to the traditional dance, with giant interactive displays that mesmerize you.

Then experience a traditional live flamenco performance at one of the best venues in Seville, a wonderfully atmospheric 18th-century courtyard.

So that sums up our top 10 things to do in Seville, we hope you enjoyed it.

Top 10 Things To Do In New York City