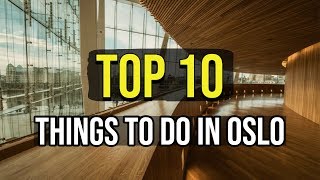 Oslo, the capital of Norway, sits on the country’s southern coast at the head of the Oslofjord and is the third-largest city in Scandinavia.

This trendy and sophisticated metropolis is a modern and diverse city and a hub for many fascinating museums, sports venues, and other cultural institutions.

Many of these are on the Bygdøy Peninsula, including the waterside Norwegian MaritimeMuseum and the Viking Ship Museum, with Viking ships from the 9th century.

This is home to the world’s best-preserved Viking ships which, unusually, were used as gravesites for important members of Viking society.

Both the ships and the burial findings are on display including a large, beautifully intricate wagon, amazingly well-maintained clothing items and the skeletons themselves.

The Vikings have played a huge part in Scandinavian culture and the Viking Ship Museum is the perfect place for a visit.

Visitors can see the best that Oslo has to offer with a specially designed bus route covering major sightseeing destinations in the city.

With 18 different stops at Oslos special sights, visitors can tune into the audio guide for a factual tour as you travel and explore the city at your own pace.

Highlights include the Royal Palace, Vigeland Museum, the Opera House, Viking Ship Museum, and many more!

8) At number 8 is Vigeland Sculpture Park

The Vigeland Sculpture Park is one of Norway’s most visited attractions. The park is home to more than 200 sculptures in bronze, granite and cast iron displaying human emotions and life stages in interesting ways.

The artist behind them is Gustav Vigeland, who was also responsible for the design and architectural outline of the park.

His large house and studio, built on the premises, is now a museum dedicated to the artist and the park is free and open all year round.

7) Number 7 is the Akershus Fortress

Akershus Fortress or Akershus Castle is a medieval castle that was built in the 1300sto protect and provide a royal residence in Oslo.

The castle has also been used as a military base, and today is a museum open to the public. Access to the fortress grounds is free and gets visitors some of the best views of the Oslo Fjord.

6) At number 6 is Viking Biking

Visitors can explore the stunning city of Oslo and its surrounding area on two wheels, with a robust bike fit for a Viking.

Viking Biking is happy to help plan your route according to your fitness and experience level so that you can enjoy all that Oslo has to offer.

Visitors can hop aboard a classic wooden ship and sail out from the port of Oslo on a sightseeing adventure into the wild heart of the Oslo fjord.

Explore the rugged beauty of the Oslo fjord and sail past idyllic bays lined by beautiful Norwegian architecture, pass lighthouses and navigate a maze-like archipelago of tiny islands.

4) At number 4 is The Royal Palace

The Royal Palace in Oslo was built in the first half of the 19th century as the Norwegian residence of the French-born King Charles III of Norway, who reigned as king of Norway and Sweden.

3) Number 3 is the Oslo Opera House

A spellbinding landmark right on the harbor, the home of the Norwegian National Opera and Balliet, was completed in 2007.

Resembling an iceberg, this angular building is clad with white granite and Italian marble and has a main auditorium that can seat 1,364 spectators.

Even if you do not manage to see a show here, the building is worth a visit in itself, take a walk on the roof for a phenomenal view of the Oslofjord.

Visitors can see Oslo from a whole new perspective with the Hop-on Hop-off Boat.
This 24-hour ticket stops at five different locations and puts you on a wooden traditional sailing ship in the inner part of the Oslo Fjord.
Listen to the onboard audio commentary for information on the sites and stop at five different locations including the Opera House, City Hall, museums and more.

1) And at number 1 is TusenFryd Amusement Park

TusenFryd Amusement Park, located around 20 kilometres south of Oslo, is Norway’s largest amusement park.It features attractions for all ages, with over 30 fun roller coasters, carousels, along the ride and much more.

During the summer the Water Park, BadeFryd, is also open with a swimming pool, a swimming river, and a huge waterslide.

So that sums up our top 10 things to do in Oslo, we hope you enjoyed it.