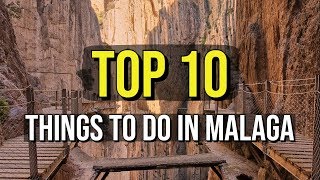 Málaga is a port city in southern Spain that lies on the Costa del Sol and boasts some of the most significant cultural infrastructures in Europe.

Known for its scenic beaches, magnificent castles, stylish harbors, and excellent restaurants, Malaga is a city full of traditions that have shaped both its history and its people.

There are many things to see and enjoy in Malaga, so tourism in Malaga is much more than enjoying its fabulous coastline and beautiful landscapes.

From its Moorish history to modern time, the city is full of interest and surprises.

Top 10 Things To Do In Málaga

10) At number 10 is the Cable Car Benalmádena

The Benalmadena Cable Car was opened in 2003 and became one of the main tourist attractions on the Costa del Sol.

The Cable Car takes you on an amazing 15-minute journey up to the highest point, at an altitude of almost 800metres above sea level.

Visitors can discover some of the best views of the Costa del Sol but also the beautiful sight of the Sierra Nevada Mountains.

The Hop-on Hop-off Bus Málaga is the best way to see all you want in this large port city, home to stunning architecture, world-class museums, and great attractions.

With two different lines, the Red and the Green, offering different routes around the city, enjoy panoramic views in an open-top bus!

From the beautiful cathedral to gorgeous 19th-century gardens, hop on and off whenever you like, at all of Málaga’s most convenient locations for sightseeing.

Each bus is equipped with audio guides giving helpful commentaries along the route.

8) At number 8 is Centre Pompidou Málaga

Opened in 2015 on the waterfront, in the port area, the Pompidou Centre is housed in a low modern building crowned by a stunning multicolored cube.

Inside, the museum boasts fantastic exhibits borrowed from the Pompidou in Paris.

See more than 80 artworks, from 1905 and later, where Picasso’s work sits alongside other historical masterpieces, as well as amazing contemporary works.

This sustainable park promotes the conservation of animals, plants, and tropical forests, and uses invisible barriers to make you feel like you’re right in the middle of the action.

There are four different habitats with more than 200 rare species at this must-see Malagaattraction.

The Castillo de Gibralfaro, a Moorish castle, dates back to the 10th century and is located on Gibralfaro hill, overlooking Málaga city.

This majestic landmark has been mostly restored and also features a military museum.

It can be reached by bus or foot and is well worth making the step climb to enjoy the scenic view over the city.

5) Number 5 is the Kelipé Flamenco Show

Flamenco Music is the traditional genre of Andalucia with its roots mixed between the Spanish culture and Gypsy culture.

Malaga, as one of the main cities in Andalucia, offers several opportunities to listen to the real flamenco while watching the dancers enchanting their audience.

The cast of Kelipé consists of five talented artists known for their dedication, passion and technical skills, with the Flamenco dance being recognized world-wide.

4) At number 4 is the Picasso Birthplace Museum

Málaga is not only the birthplace of Pablo Picasso but also offers a marvelous collection of his works.

The Museo Picasso Málaga is located in the center of the old town, close to the Plaza de la Merced, where Picasso was born.

With over 200 different works that offer a unique insight into his developing style, visitors can see a fascinating selection of Picasso’s work from the late 19th century until his death in 1973.

3) Number 3 is the Roman Theatre Alcazaba

The Roman theatre can be found in the southern part of Málaga, at the foot of the Alcabaza.

The theatre represents traditional Roman theatre architecture with the typical tiered seats and a grand entrance.

It remained in use until the third century until it was converted into a source for building material.

At the time of its construction, Málaga represented one of the most important cities in Spain.

2) At number 2 is Selwo Aventura

Visitors can see over 2000 animals in a spectacular conservation park just an hour outside of Malaga.

Meet the animal-keepers at various daily talks and feedings and learn about elephants, lions, ring-tailed lemurs and more.

Then walk the hanging bridge over the Great Lake and see the Iberian Lynx from above. It is a fantastic day out for all the family in the great outdoors.

1) And at number 1 is Caminito del Rey

Pinned along the steep walls of a narrow gorge in El Chorro and constructed at the beginning of the 20th century, the path promises incredible views.

So that sums up our top 10 things to do in Malaga, we hope you enjoyed it.