Skip to content
Travelling
Dubai is located on the Eastern coast of the Arabian Peninsula, in the southwest corner of the Arabian Gulf. It is extremely well known for its warm hospitality and rich cultural heritage, and the Emirati people are welcoming and generous in their approach to visitors.

With year-round sunshine, intriguing deserts, beautiful beaches, ultramodern architecture and amazing attractions that outrank many of the world’s best, Dubai receives millions of visitors each year from around the world. It is a city that must be seen, with record-breaking architecture that stands alongside traditional quarters and man-made islands that jut out of the coastline.

There is a delicate balance of old and new, as Dubai continues to emerge as a cosmopolitan metropolis that is growing steadily to become a global city and cultural hub of the MiddleEast and the Persian Gulf region.

From the world’s tallest skyscraper and a restaurant that’s under the ocean, to21st century shopping and ancient Bedouin traditions, Dubai has an intoxicating mixture of attractions and activities to keep all visitors busy. 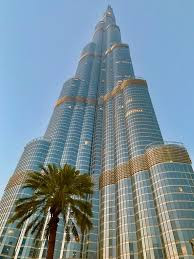 The Burj appearance is based on a flower called the Spider Lily, the Hymenocallis flower and means that the towering structure is essentially three sections arranged around a central core. Located in thriving downtown Dubai, the super skyscraper takes center stage in the famed skyline, but the true majesty of the building is best appreciated up close or, even better, from inside.

On a clear day, the view from the observation deck on level 124 is absolutely stunning, topped only by the view from the luxurious At The Top Sky Lounge on the 148th floor. The floor to ceiling glass walls and open-air terrace on the observation decks will grant you spectacular views from every angle. There are also multimedia presentations and augmented reality telescopes.

The building has 57 elevators that have a capacity of 12 to 14 people per cabin, with the fastest rising and descending at up to 10 meters per second. At the base of the mighty tower, you will find a vibrant hub of entertainment and dining, featuring the enormous Dubai Mall, the choreographed musical Dubai Fountain, and many other tourist attractions.

The Green Planet is the region’s first bio-dome that recreates the enchanting world of a tropical forest with its rich bio-diversity. The enclosed ecosystem, located at City Walk, offers visitors an amazing expedition into the tropics.

The Green Planet recreates an exotic, sensory experience of traveling through a lush and verdant rainforest. Visitors can explore a range of striking landscapes from mysterious forest pools to treetop canopy platforms, cliff-hanging gardens, and waterfalls surrounded by birds, butterflies, and aquatic animals.

The Green Planet is kept at a temperature of 25 to 28 degrees Celsius and visitors can see over 3,000 species of plants, animals and free-flying birds, including porcupines, sloths, snakes, and spiders. Learn what happens at all levels of a rainforest, start in the canopy, 30 to 45 meters above the ground and see what lives in the bright roof of the rainforest.

Then explore the forest floor, home to fish, lizards, and frogs. This fantastic attraction has a very strong conservation message and is a great destination for families and guests of all ages.

Sitting near the Bastakiya Quarter, the Dubai Museum offers visitors a glimpse of where this monumental city has been, and where it is going. It has an atmospheric setting in the compact Al Fahidi Fort, built around 1800 and considered Dubai’s oldest remaining structure.

Visitors can walk through a mock souq, see exhibits on Bedouin life in the desert, explore a room highlighting the importance of the sea and view displays about the days before the discovery of oil. The main exhibit is underground and reached via a spiraling ramp.

A video and a timeline use historical prints and footage to illustrate just how far Dubai has come since the 1960s. The final galleries present archaeological finds from ancient settlements and tombs at Jumeirah, Hatta and other local sites, that reveal that the area has been settled for at least 4000 years.

The Burj Al Arab stands on an artificial island 920 feet from Jumeirah beach and is connected to the mainland by a private curving bridge. Overlooking the Persian Gulf, this stunning building has wowed visitors since it opened in 1999.

At 1,053 feet high, it is one of the tallest hotels in the world, however, 39% of its total height is made up of non-occupied space. Its curved glass façade is modeled on the sails of traditional wooden cargo vessels that have graced Dubais waterways for many years. Located on its own man-made island, the building houses one of the tallest atriums in the world at nearly 600 feet high.

During the day the Burj al Arab is a brilliant white against the blues and turquoise of theGulf.But at night time the building takes on a whole new look with computer-controlled spotlights that turn the building into an array of dazzling colors. Non-guests are only allowed into the Burj with a prior reservation at one of the hotel’s bars, cafés or restaurants. But if you make your way to the public Sunset beach it has some of the best views of Burj al Arab.

6) At number 6 is Jumeirah beach

Within walking distance of the Burj Al Arab, the Jumeirah Beach is arguably Dubai’s best strip of public sand as it boasts deep golden sands lapped by the warm waters of the Gulf.

This is a haven for sun worshippers who come to this lively shoreline to revel in Dubaisbright rays and enjoy the warm breeze. While water sports enthusiasts can take advantage of the calm, turquoise waters of the Persian Gulf. Jumeirah Beach is also equipped with a children’s playground, public showers and plenty of barbecue and picnic areas.

Just make sure you visit early as the area grows steadily more crowded throughout the day. Jumeirah Beach can be reached from Jumeirah Road and is open from 7 a.m. in the morning depending on the day. The front of the beach is bordered by a lovely promenade that has plenty of cafes, bars and restaurants and access to the beach is free, but visitors do have to pay for access to the park.

Dubai is globally recognized for its world firsts, and The Palm Jumeirah is an impressive example. It spans five square kilometers, adding over 78 kilometers to Dubai’s coastline.

Viewed from above, the manmade island resembles a stylized palm tree, which was built from reclaimed land mass and a series of artificial archipelagos. Palm Jumeirah is home to some of Dubai’s most luxurious resorts and it is also packed with fantastic restaurants.

The Palm is well developed, with roads, tunnels and public transport. So you can easily access the various hotels, restaurants, and attractions on the island. You can also hop aboard the Palm Monorail that runs to Atlantis that sits at the helm, which offers astonishing views and amazing scenery as you travel.

The entrance to the Palm Jumeirah Island is free and this area of the city is open for all guests and visitors.

Skirting the Burj Khalifa in downtown Dubai is every shopper’s paradise. The massive Dubai Mall is one of the largest shopping centers in the world and houses more than 1,200 shops and over 150 restaurants. Even an entire day spent here isn’t enough to see it all, but even if you aren’t interested in buying anything, a visit to this immense retail center is a must.

The Dubai Mall also contains numerous entertainment facilities, such as an ice rink, a huge indoor waterfall, a movie theatre and several kid-friendly attractions, including an aquarium that houses thousands of underwater creatures and an indoor theme park.

If you happen to be around in the evening, stop by the Dubai Fountain just outside of the mall.

3) Number 3 is the Dubai Frame

Dubai Frame is one of the newest additions to the city’s skyline and represents a remarkable engineering feat.

Situated in Dubai’s Zabeel Park and directly between old and new Dubai, the towering structure offers sweeping panoramic views of the city from 150 meters high. One of its most amazing features is the state of the art clear Glass Bridge connecting parallel vertical towers to create the shape of a picture frame.

On the Sky deck level, take a look at present Dubai with views of Old Dubai to the north, and New Dubai to the south. See the souks, the hotels, palaces, and massive malls, and find out which skyscraper is which, via special interactive screens, showing information on architecture, economy, and infrastructure.

Step back to a time when Dubai was just a humble fishing village, and find out how it was transformed into the modern metropolis of today. The Dubai Frame has quickly become a must-see attraction for the city’s visitors and is well worth a visit.

2) At number 2 is IMG Worlds of Adventure

Located next to Global Village and housed in an air-conditioned hangar the size of 28football fields, IMG Worlds of Adventure is one of the world’s largest indoor theme parks.

The park is truly impressive, with more than 20 rides and attractions split across themed zones. Fun, excitement, speed and even 5D, you can expect all this in the enormous theme park, with the most up-to-date and exciting rides.

There are rides for younger visitors with Ben 10, Gumball, The Powerpuff Girls, and LazyTown, while older visitors can delve into the world of Marvel heroes such as Spider-Man, Hulk, Iron Man, Thor, and The Avengers.

You will also come across life-size animated dinosaurs in the Lost Valley. The range of entertainment promises round the clock fun for the whole family, and there are also plenty of restaurants and shops to explore.

The Dubai Fountain is one of the world’s biggest choreographed fountains, positioned in an enormous 30-acre manmade lake.

Boating on the lake in the shadow of the world’s tallest building is definitely something to remember, but watching this dazzling nightly show from the water itself is an amazing experience. This popular dancing water show jets water streams as high as 150 meters into the air. Each colorful, illuminated jet, sways in time to various musical numbers from around the world, producing what has become one of the most popular shows in Dubai.

The unique design features five circles of jets that shoot water to impressive heights that can be seen from over 30km away. With the introduction of thousands of super lights and over 20 color projectors, thespectacle is a visual masterpiece.

At each show, crowds jostle for the best view on the promenade around the perimeter, but the views from the water are unobstructed and magical.

So that sums up our top 10 things to do in Dubai, we hope you enjoyed it.

Top 10 Things To Do In Moscow