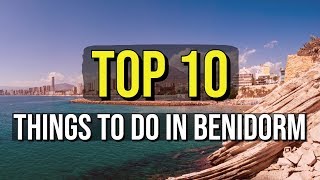 Benidorm is a city in the province of Alicante in eastern Spain on the Mediterranean coast. Once a tiny fishing village until the 1960s when it became a popular Mediterranean holiday destination.

Its two wide sandy beaches, Levante Beach and Poniente Beach, are backed by palm-lined promenades, bars and rows of skyscrapers.

Top 10 Things To Do In Benidorm

10) At number 10 is Mundomar Benidorm

Mundomar is an animal theme park inhabited by aquatic animals such as dolphins, penguins and sea lions as well as tropical birds.

There are large enclosures and each species lives within an area closely resembling itsnatural habitat.

With many regular shows and demonstrations to see, the dolphin show is definitely thehighlight of the day dazzling the audience with a synchronised display.

There are also special experiences such as meeting with dolphins face-to-face or swimmingwith sea lions, these are very popular so it’s advisable to book in advance.

9) Number 9 is the Benidorm Old Town

Benidorm Old Town is a completely different world with a great chance to dive into some authentic Spanish culture and history.

Walking is the best way to explore the Old town area and the whole place is burstingwith character and charm.

Begin by wandering around the maze of narrow, cobbled streets and discover shops, cafésand pubs tucked away in little side alleys.

The blue-domed church and rows of white houses help the Old Town keep that authentic feel.

8) At number 8 Take a trip to Benidorm Island

Benidorm Island is a small island and nature reserve and makes a great excursion for the whole family.

The boat ride out from Levante Beach is half the fun, putting the size of Benidorm into context.

On the island there’s a small café, but the best thing to do is to take the shorthike to the top of the hill for splendid views.

The cross, to the west of Benidorm, was replaced with a permanent monument in 1975 when the old one was blown away in a storm.

Situated at the top of the Sierra Gelada Natura reserve, the views from the cross are spectacular both day and night and it is well worth a visit just to see the stunning scenery across Benidorm and the surrounding area.

The Church of ‘Saint James,’ is dedicated to the patron saint of the town, is set at the very top of the Old Town on a hill called Canfali.

It is a Neoclassical building, built in the 18th Century with a typical blue Mediterraneandome. It’s lovely interior has a Latin cross layout with a central nave and small side chapels.

Aqualandia Benidorm is one of Spain’s oldest and best water parks. It opened in 1985 and continues to grow with new rides and amusements added almost everyseason.

Some of these can break records, like Big Bang, one of the tallest water slides in Europe, while the Vertigo sends riders hurtling to the splash pool at immense speed.

The wave pool at Aqualandia is gigantic, with enough room for thousands of swimmers at onetime. Aqualandia is one of the best days out in Benidorm for all the family.

4) At number 4 is Poniente Beach

Poniente Beach is generally quieter and more family-oriented than the bustling Levante beach.

The golden sandy beach is cleaned every day and there is safe bathing with lifeguards on watch.

This beach has received a lot of investment in the last few years, with a network of boardwalksmaking it accessible to wheelchair users.

The Sierra Helada nature reserve, which is stretched across the mountains and cliffs around Benidorm, has several hikes that are suitable for all abilities.

There are well-signposted hiking trails, including a stunning cliff walk and another that leads to the Benidorm Cross at the top of the mountain for some tremendous views.

2) At number 2 is The Balcony of the Mediterranean

The Balcony of the Mediterranean, also known as the Benidorm overlook, divides two beaches and offers a great view over the sea.

In the past it was part of the fortress built to defend the people from pirate raids, afterwardsthe castle was abandoned, and today visitors may only see the remains of the walls on therocks and the viewing point which is also known as The Balcony of the Mediterranean.

1) And at number 1 is Terra Mítica

One of Spain’s biggest and most famous theme parks is right next to Benidorm. Its three areas are inspired by ancient civilizations and feature huge rollercoasters, exciting rides and all kinds of live performances including choreographed street shows.

Visitors can shoot lasers at monsters in the Minotaur’s Labyrinth, get drenched on the thrilling Fury of Triton or relax in the terraces of the Fountains of the Nile.
.
With so much to do and see Terra Mítica, there is something for everyone.

So that sums up our top 10 things to do in Benidorm, we hope you enjoyed it.

Top 10 Things to Do In Rome