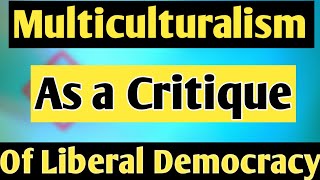 There are many identities individuals are located in, but multiculturalism talks about the cultural identity of individuals.

Multiculturalism is concerned with the plurality of culture with a distinct identity.

Liberal democracy is the context of the rise of Multiculturalism. Every ideology, whether it is liberalism, realism or communism, is related to a particular culture. Liberalism as an ideology endorses a particular culture. It promotes the culture of equality and liberty, which is known as liberal culture.

This liberal culture talks about liberty, rights, and equality at the level of the individual.

But it ignores groups, communities, belongingness to group identity, etc. It also ignores the selflessness of individuals. Because it endorses such a culture that is based on the self-interested, egoistic individual. But in this process, it ignores human solidarity, identity within a group, rights related to communities, psychological belongingness, etc.

Liberalism argues that in order to promote equality in society it is impossible to give preference to group rights or identity. Therefore, it tries to create a National culture.

So, Multiculturalism started as a movement to oppose and resist the dominance of the majority and demanded certain special group rights to preserve the cultural distinctiveness of minorities.

Multiculturalism talks about the existence of many cultures with distinctiveness. Recognition of distinct identity is the main feature of multiculturalism.

Why is liberal democracy very skeptical about group rights or differences?

However, the above-mentioned arguments of liberalism have been questioned by Multiculturalism.

Liberal democracy failed to recognize group rights and collective identities of individuals. It tries to create a national culture (which is homogenous) and end up creating a majority culture in which minorities are deprived of their rights. Therefore  Multiculturalism began as a critique of liberal democracy.