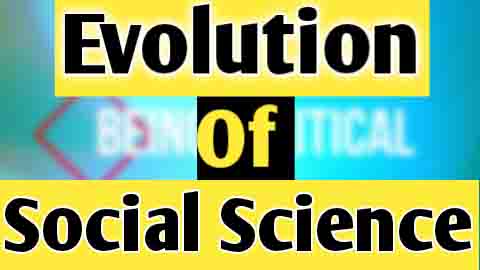 The origin of social science can be followed back to some philosophies which were dominant in western countries.

Social science basically refers to the empirical investigation of social relations that exists in human society. In the early 17th century, the first attempt was made to study the individuals’ relations with their social environment.
Hobbes’ Leviathan, Locke’s Two treaties on government, Montesquieu’s Spirit of law was publisher during this period, which contributed towards the study of  “man living in a society”.
From the later half of the 17th century, there occur tremendous changes in individuals’ life and social relationship. Renaissance in Italy and other European countries, the Glorious Revolution, the French revolution, the American war of independence,  the emergence of a new form of capitalism all these brought both happiness and sadness to man’s life and living.
In a positive sense, it paved the way for the fastest commercial development, development of means of transportation and communication technology, etc.
But on the negative side, it leads to the development of social complexity, political chaos, social unrest, etc. Therefore, in order to counter all these problems, social science originated and become a part of academic discipline.
Thus, Social science emerged out of the age of enlightenment, renaissance, and other related development. After that people started adopting a more disciplined approach to quantify their observation of society.
During this period August Comte become the first person to coin the term sociology. He came out with a complete analysis of the basic principle of social science.
By the end of the 18th century, social science was given a firm and respectable position in almost all European countries and it even becomes a subject of research.
Now social science is regarded as a study, whose subject matter is directly related to the development of human society and with man as a member of society.
It is used as an umbrella term to refer to subjects such as history, political science, economics, education, etc. Therefore its scope is as wide as the earth itself.