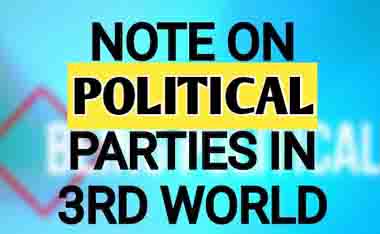 Political parties in the Developing Countries:

Role of Ideology in Shaping Political Parties of Developing Countries :

Ideology is the orientation of looking at certain events. The ideology of Political parties provides a framework of common values.
In the case of the 3rd world, there is a distinction between ideological development and political organization based on them.

There are mainly two preoccupations in the analysis of 3rd world political parties. The 1st one concerns the development of the single-party system, whereas the 2nd one concerns the survival of parties as an institution.

1. Development of the single-party system:

2. Survival of parties as an institution:

There is no clear explanation of the survival of parties as an institution. Party as an institution differs, according to organizational structure, size, nature of membership, method, and pattern of authority, etc.
While discussing party as an institution, the decentralization factor becomes very important, because parties that enable upward communication from the masses are more likely to survive long.